There are more than a dozen new weapons in Dark Souls 3: Ringed City DLC, from swords and shields, to spears and chimes. Many of them have unique move sets and special attacks, making them worth getting even if you’re not into a particular type of weapon. Collecting them all might be difficult, since some are well hidden. In this guide, we’re going to show you all Ringed City weapons in Dark Souls 3, where to find them and their stats. 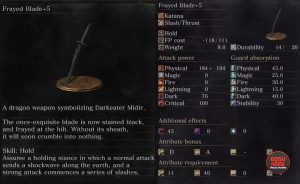 This blade is a new Ringed City katana, one that deals dark damage by default. It starts off with a B in dexterity scaling, which probably makes it the best katana in the game. It also seems to cause bleed build-up faster than other weapons. In order to get it, you’ll have to defeat Darkeater Midir. Take his soul to Firelink Shrine, and you’ll be able to transpose it into the Frayed Blade. 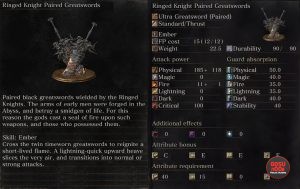 Since ultra greatswords weren’t stupidly fun to use before, you can now wield two! They scale with all four stats and do a bit of fire damage, and have a skill that allows you to set them alight. They’re obtained by killing Ringed Knights – there’s one by the Spears of The Church altar that uses them, and he’s almost certain to drop them. 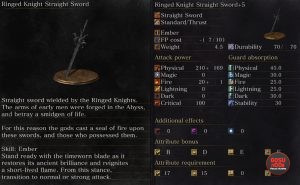 This straight sword is similar to the pair above – it scales with each stat, does a little fire damage on its own, and can be engulfed in flames for extra damage. You can find it near the Ringed City Streets bonfire – get out into the swamp, then climb the hill on the right and look for a stone dome. It’s on a corpse next to it, overlooking the bonfire room. 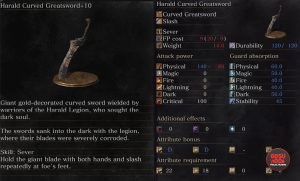 Another greatsword that is bound to be popular in PvP – it has a nasty R2 that can be spammed if you have enough stamina, staggering the opponent in a way similar to Estoc. You can find it in the Earther Peak Ruins area. Go down to the swamp and turn left. Go under the giant root next to the house, and you’ll end up in a small pool with a Harald knight. The sword is on the body next to him. 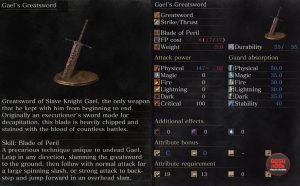 Gael’s Greatsword is the weapon used by the Slave Knight Gael, the DLC’s final boss. It’s a rusted, chipped greatsword, bathed in blood. It doesn’t look like much, but it scales nicely with strength, and has a unique weapon skill which allows the wielder to perform an amazing combo. You can get it by beating Gael, then transposing his soul into a sword using the Transposing Kiln. 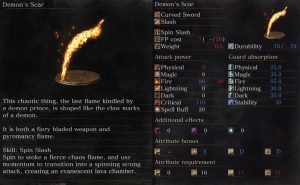 Demon’s Scar is a curved sword you can get by transposing the soul of the Demon Prince boss. It’s a fiery blade that does no physical damage, relying only on the fire. It scales with faith and intelligence and can be used as a pyromancy flame as well. It might be a game-changer for pyromancers, but even if it isn’t, it’s a welcome addition to thier arsenal. 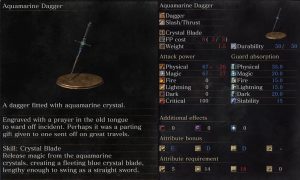 After you spawn at the Dreg Heap bonfire, go to the ruins down the road and turn left. Up the stairs, you’ll find a Harald knight, guarding a dead body. The dagger is on the corpse. It inflicts added magic damage, scales with intelligence, and has a skill that increases its reach to that of a straight sword. 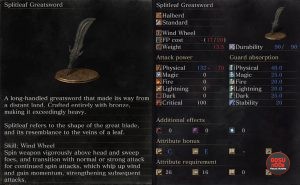 Although it’s called a greatsword, this one is actually a halberd. It looks like the one used by the black knights, only with a leaf-like blade. It has great strength scaling, and a spinning weapon art that makes it great for crowd control. You can buy it from the vendor near the first bonfire in the DLC, or, if she dies, from the Handmaiden (once you give her the ashes of the vendor). 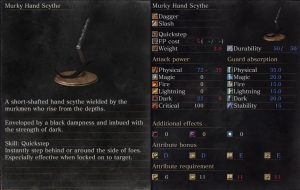 Spawn at the Dreg Heap bonfire, and jump off the crumbling ledge and through the stained-glass window. Once in the library, look for a hunched corpse. You’ll find the sickle on it. Its moveset is pretty much like the Shotel, but it does some dark damage by default. It scales with all four stats a little, so it’s neither here nor there.

Crucifix of the Mad King 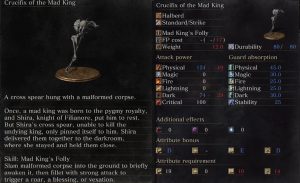 Crucifix of the Mad King is a polearm, a spear with a corpse on it. It has a standard spear moveset, with the ability to wake the corpse who then casts spells. It does a bit of dark damage, and scales with strength, faith and intelligence. You can get by defeating Shira in the Slave Knight Gael arena, after you’ve already beaten the boss. 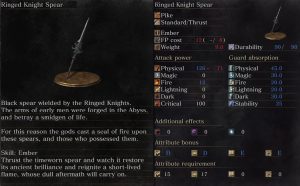 Just like the other Ringed Knight weapons, this one also does slight fire damage and allows you to set it on fire for added effect. The scaling is all over the place, as every stat contributes a bit. You can find it on a corpse just below the room where you meet Lapp near the Purging Monument. 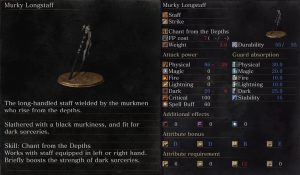 This staff does dark damage, scales really well with intelligence, and has the ability to boost your dark sorceries. It’s anything an up-and-coming Voldermort could wish for. You can get it by going to the Dreg Heap, past the first angel, then right after the building with the two knights. Just keep going until you hit a dead end, and you’ll find a corpse with the staff. 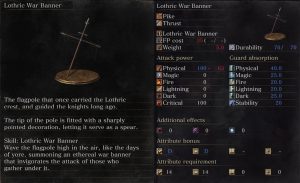 This war banner is actually a standard thrusting spear, when it comes to moves. Its weapon art allows it to increase your attack power for a while. It affects allies as well, so it’s a great choice for coop. You’ll find it on a corpse right before you make the long jump to Earthen Peak Ruins – it’s really hard to miss. 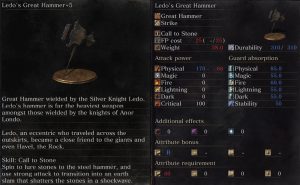 Ledo’s Great Hammer is a great weapon for any build that relies on brute force. You’ll need 60 strength to wield it properly, and it starts off with a B in STR scaling. You can get it by defeating the NPC invader Dark Spirit Silver Knight Ledo. Spawn at the Ringed City Streets bonfire, get out into the swamp and go left, up the ladder. Turn right when you climb the stairs, then jump onto the ledge and follow the path into a room. This is where he’ll spawn. 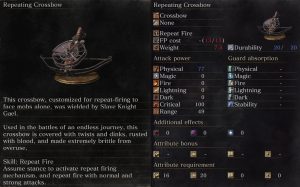 This one is obtained by transposing the soul of Slave Knight Gael. It has the ability to fire a barrage of bolts, but it’s very brittle. It only has 20 durability, so you’ll have to fix it very often. Its damage doesn’t scale, at all. 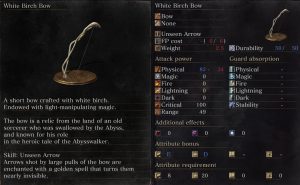 This one is a bit strange. It’s an unremarkable weapon in all ways but one – it can shoot invisible arrows. This could be of great use in PvP, but we haven’t had the chance to try it out. To get it, you need to spawn at the Ringed City Streets bonfire, cross the swamp and climb the path behind the sunken tower. You’ll find the corpse with the bow on a ledge there. 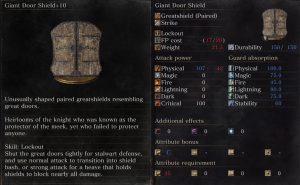 This one is pretty self-explanatory. It’s a pair of wooden doors, used as shields. You can hit people with them, or you can use them for protection – they’re pretty good at both. The weapon art allows you to turtle behind them both and seamlessly transition into a bash. You can find them near the Earthen Peak Ruins bonfire, on the cliff past the angel.

Another shield, but this one is an actual dragon head, only petrified. You can use it for protection, but it also spews flames on command. Quite handy. You can get it in the Ringed City Streets, after you solve the Show Your Humanity puzzle. Turn your back on the Purging Monument, turn left across the bridge and follow the ledge to the shield. 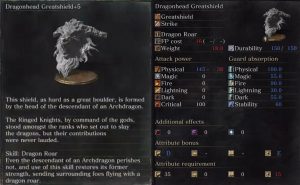 Dragonhead Greatshild is the older sibling of the one from above. It’s a bigger dragon head, with the power to perform a force push. It can be obtained under the bridge where you first meet Darkeater Midir. It’s guarded by a Ringed Knight. 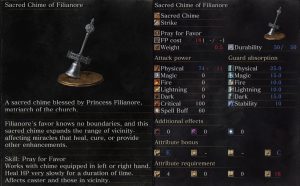 Sacred Chime of Filianore is the only new chime, so clerics should get it as soon as possible. It has a C in faith scaling, and it increases the range of miracles that cure, heal or enhance. The skill slowly fills the health bars of both you and your allies. You can get it by choosing Gwyn in your first conversation with Shira, and agreeing to help her. You must do this before you kill Gael – she’ll turn hostile after that. 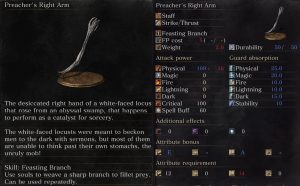 Preacher’s Right Arm counts as a staff, but it also acts as a catalyst. It’s a severed arm, and its damage output scales with intelligence quite well (starts off with A). Spawn at the Ringed City Streets bonfire and go through the iron gate. Once you’re out, go towards the swamp. The arm will be on the sunken tower nearest to the building. When you pick it up, a bunch of locust-men will spawn.

PREVIOUS POSTDkS3 Ringed City How to Defeat Demon in Pain, from Below & Demon Prince

NEXT POSTBioWare will talk about Andromeda plans on April 4th