Wolf Knight Armor Set is an outfit in Dark Souls 3. It was originally worn by Artorias of the Abyss, a valiant knight of old. It can be bought from a merchant in a secret area, after you’ve defeated a certain boss. In this guide, we’ll show you how to get Wolf Knight armor in Dark Souls 3, what it looks like and how well it works.

Where to find Wolf Knight Armor

To get this set, you’ll have to go to a secret area called Untended Graves. You’ll have to kill the boss found there, Champion Gundyr, and get to a dark version of Firelink Shrine. Once there, you’ll be able to buy the set from the Handmaiden, for 46,000 souls.

To get to Untended Graves, you’ll have to beat Oceiros, The Consumed King. After that, go through the large stone door and follow the path until the end. You’ll see a dried-up fountain in the middle of the room, and a chest in the back. Hit the wall behind the chest, and you’ll open up the passageway to the new area.

Description:
Armor of a knight tainted by the dark of the Abyss. The twilight blue cape is damp, and will ever remain so.

A vanquished knight left behind only wolf’s blood, and his legacy of duty. The Undead Legion of Farron was formed to bear his torch, and the armor of these Abyss Watchers suggests their own eventual end. 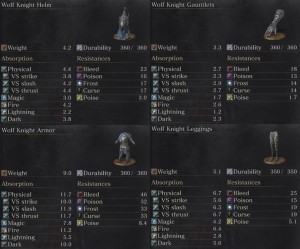 It’s a medium-weight set. It provides decent protection, while still allowing the wearer to move at a normal pace, without having to invest heavily into VIT. The protection from bleeding it offers is also nothing to scoff at.