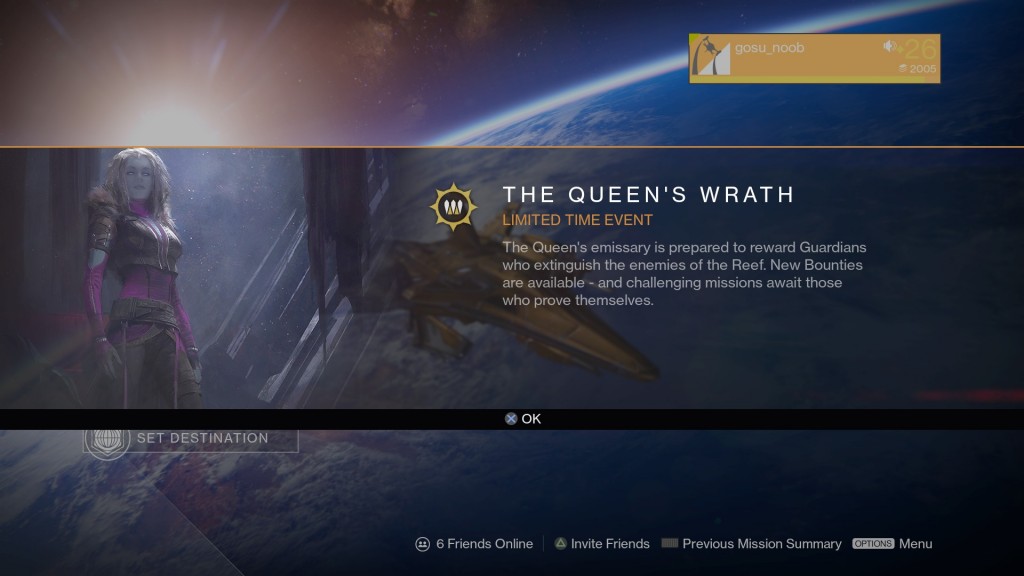 New event was just made available in Destiny called The Queen’s Wrath. Queen of the Reef (asteroid belt region on Destiny’s map – you got to meet her in story missions) asks of guardians from September 23rd until October 6th to join her in new bounties and challenging mission modes. This event introduces new reputation for you to grind for and a new vendor that sells legendary items for Glimmer (based on the reputation you earned with the Queen). Once you do at least one bounty for the Queen you will also unlock a Mission (or Kill Order as it’s called in the game) you can do. This mission can be accessed where you do all your daily and weekly missions (galaxy map) and when I did it for the first time it was the last story mission “The Black Garden”.

Once you reach Ranks two and three with the Queen you can visit the vendor located behind the Bounty Tracker on the Tower and purchase Legendary items and weapons (also two shaders and class items) for Glimmer. Click here for location of the vendor and list of all the items you can purchase.

You are offered to do 6 Reef bounties, two of which are for the Crucible and four are PvE bounties. If you do all of them you will get 500 reputation with the Queen. You need 1000 reputation for Rank 1, 3000 for Rank 2, and 5000 for Rank 3, which means you will have to do a lot of these bounties to fully rank up with the Queen. Here is a short overview of all bounties with some tips.

Bounty: Archon Slayer
Description: Defeat Riksis, the Devil Archon, in the Cosmodrome on Earth.
Notes: Do the mission Restoration on Earth and end boss there is Riksis, the Devil Archon. You can do the mission at pretty much any level – kill will count.
Bounty: Last Day of Winter
Description: Defeat Draksis, Winter Kell, in the Scourge of Winter on Venus.
Notes: Do the Scourge of Winter story mission on Venus.

Bounty: Extermination Protocol
Description: Defeat 200 Fallen with headshots.
Notes: Do the Story Mission bounties where you will fight a lot of Fallen. Use your Scout Rifle and Sniper for as many headshots as possible.
You can complete this bounty on new Engrams & Glimmer farming spot on Venus in Ember Caves area. There is a cave with fast respawning Fallen creatures.

Bounty: Relic Harvest – Fallen
Description: Collect 200 Ether Drops from Fallen Enemies on any planet.
Notes: You get two bounties to do story missions with a lot of fallen enemies. Just do all these bounties together. For maximum efficiency you want to hunt for “yellow health bar Fallen enemies”. Killing those yields 20 Ether Drops for a single enemy. Killing Fallen Bosses (or Ultras as they are called) rewards 50 Ether Drops. You can also do a strike on Earth where you will encounter many Ultra and Major Fallen.

Bounty: Face Your Fears
Description: Defeat 3 Fallen Walkers
Notes: Fallen Walkers can be found on Earth while completing The Devil’s Lair Strike or Public Events, but it’s important that you kill the creatures, it doesn’t count if someone else kills them. During The Devil’s Lair strike, when you pass the area where you have to deactivate Mesh Layers, you will find Fallen Walkers. You can also find them during Public Events on Earth in the Divide area at X:15 and X:40 (where X is every hour). You can check out our detailed guide for best Public events route.

Bounty: For Her Honor
Win 3 Crucible matches with the Queen’s Class, Emblem and Shader items equipped.
Currently (September 24th) impossible to complete because you can’t obtain rank 3 in such a short time.

Bounty: Off with Their Heads.
Defeat 15 Guardians with Sniper Rifle headshots.

Kill Order is similar to daily story missions. You unlock them by doing a Reef Bounty first (check your inventory, mission tab). For each bounty you do you will get a Mission order to do one of the Queen’s Wrath Kill Orders. These orders are basically level 24 story missions with Epic modifier that you get to play by going to your travels screen and choosing the mission just like you would a regular Daily story mission or Weekly Strike. Epic modifier says that “Heavily shielded and highly aggressive enemies appear in great numbers“. I also believe that that modifier that prevents ammo dropping for your currently equipped weapon is also enabled as part of the Epic modifier.

Firs mission I got to do was actually the last story mission of the game “The Black Gate” where you need to kill three bosses at the end. I am lvl 26 titan and if I didn’t have friends come along I would have still been doing that because that was very tough. I would recommend you bring weapons with Void damage because it seems a lot of enemies are vulnerable to Void. I also used Arc damage machine gun against certain enemies. Great thing about these missions is that as a reward you will probably get a Legendary Chest or Head item!

TIP: If you get a duplicate item, break it down and you’ll receive , some glimmer and parts. (UPDATE: Since September 25th hotfix patch this is no longer true. You do not get any Ascendant Shards from breaking down legendary items that are rewarded from Queen’s Kill Orders)
We would like to thank reddit users Quietly-Confident, RadiantViper, alzos, DamienMartin21, fallensbane, Jyon, tektonicgymrat, kayleon for sharing legendary item rewards with the community.