The best builds in The Division are the ones that suit your needs. Deciding which skills and talents are right for you depends on many factors – your play style, the composition of your squad, the weapons and gear you own.
▼Article Continues Below▼
This guide will show you the best builds, talents & skills in The Division, how to use them effectively and become a better player. 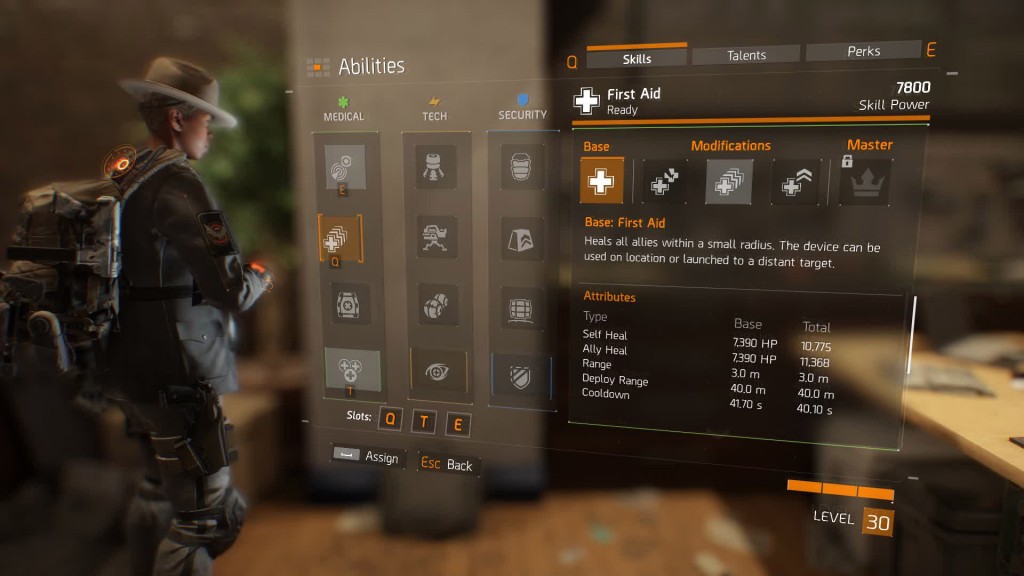 After you’ve leveled up a little, you’ll be able to equip a maximum of three skills (two regular and a signature) and four talents. You can switch them at any time, which will allow you to finely tune your build until you’ve found the perfect setup. The same way you experiment with weapons, you could experiment with abilities.

A dedicated medic is supposed to take care of his team. Although having the ability to remove status effects is nice, we feel the team doctor should always go for options that allow him to heal more.

First Aid is a no-brainer – it’s the best way to most cost-effective way to heal your buddies. We’d go for the Defibrillator mod, which allows you to revive allies. Support Station is a great surrogate medic – especially when it has the Life Support mod. It can revive allies within range when you’re not around. Not as efficient as First Aid, but self-operated. Finally, Recovery Link is a must for every doctor. It heals, cures and revives buddies around you, making it a get-out-of-jail-free card that can get you out of all kinds of tight spots.

If you’re playing solo, the turret can be your best friend. Teaming up with it can lead to many victories, if you play your cards right.

Turret is obviously required for this build. The Dragonbreath mod turns it into a flamethrower, decreasing its range and increasing its damage. First Aid will let you survive longer, with the mod giving you an overheal even. Tactical Link is the signature skill most suited to this build – it increases your damage output and chance of scoring a critical hit.

The tank is someone who’s role is to take a beating instead of their teammates. If you’re going to be tanking, you need a lot of health, a lot of armor and a good healer to back you up.

Ballistic Shield is a large shield you can hide behind, shooting only with your pistol. The mod we’ve chosen will grant you a portion of damage taken back as health. Mobile Cover lets you place improvised cover anywhere, anytime, while Extension makes it bigger and tougher, so it provides more protection and offers more space. Survivor Link increases the speed and defense of the entire team.

The bomber relies on explosive devices and talents that enhance them to dish out large amounts of damage to groups of enemies. He’s great at hurting people, but not so much at staying alive.

Sticky Bomb is an explosive device that sticks to all kinds of surfaces – the BFB modification gives it a larger blast radius and more damage. Seeker Mine is a homing device that propells itself towards enemies, while the Cluster mod makes it split into smaller parts that go for more enemies. Tactical Link increases the damage output of the entire squad.

If you want to catch a shiny Shedinja in Pokemon GO in 2022, you might…

Starting from October 4th, 2022, all players, regardless of the platform they are playing on,…

FIFA 23 Flick The Ball Up While Jogging