We got a peek of what’s coming to The Division in the near future, by hitting level 30 in PvE. A new marker appeared on the map once we did so, and gave us a glimpse of what’s to come in one of the free updates planned for Spring. 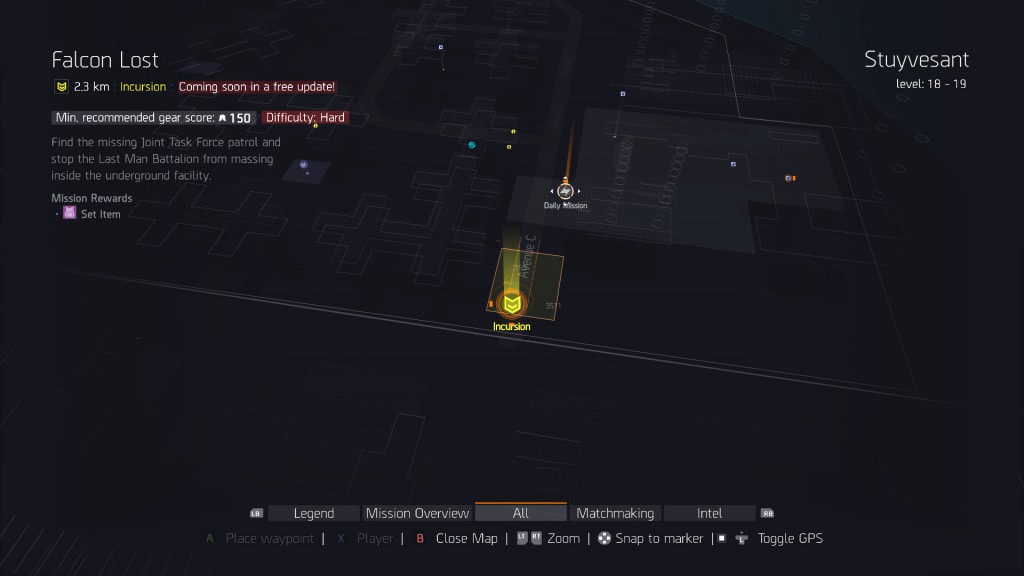 It’s an Incursion called Falcon Lost. Incursions are squad-based missions, designed to take full advantage of having a team. Unlike regular quests, they should be near impossible to complete solo.

It is located in Styvesant and comes with a preset of hard difficulty. The minimum gear score you’re recommended to have before trying it is 150. It seems like you won’t be stopped from having a go if you’re lower than that, but it isn’t advised. There’s only one reward listed, and it’s a set item of Superior rarity (purple color). Judging by the icon, it’ll be a vest (gear/armor piece). We still don’t know how item sets work for sure, but they probably offer increased benefits when the whole set is worn.

Find the missing Joint Task Force patrol and stop the Last Man Battalion from massing inside the underground facility.

We’ll be confronting an old enemy once again, trying even harder to drive them out of New York. The underground missions do get a bit stale after a while, and at least some of us wish there were more traipsing over rooftops and such. Hopefully another time. The first free update should go live in April, but there’s no telling when exactly.