When I was told that we’d be getting a copy of the Shadow of the Colossus remake, I had a very difficult time stopping myself from screaming and jumping around the office. I have played through the original several times, and gliding back into the game felt like putting on a pair of old, comfortable gloves. That isn’t to say that the remake of Shadow of the Colossus doesn’t bring anything new to the table. So, I sat down with the intention of giving it a short spin, and before I knew it, several hours where over. This is my experience with the game so far.

Shadow of the Colossus is one of my favorite games of all time. It’s probably one of the best arguments for video games as art, if you’re into that type of argument. I can’t wait for the full embargo to lift, so that I can gush my soul out like I want to. Until then, though, I want to share some of my preliminary thoughts, after spending some quality time wit the game. Before we begin, full disclosure: The copy of the game has been provided for us by Sony Interactive Entertainment Europe.

First off, let me just say, the studio behind the remake, Bluepoint Games, have done an amazing job with the visual rework. The game looks glorious, and it’s beautifully detailed. True, it does look very different from the original. The bloom effect is gone, and the color palette is more natural than ethereal. Some might be a bit disappointed by this, but I just approach it as a whole new game for objectivity’s sake. Whether or not you like the art style, though, there’s no doubt that the game looks absolutely gorgeous, almost to the last detail. Oddly enough, the one thing that looks kinda off is Wander’s face, but it’s nothing too distracting.

You can choose two different ways to play the Shadow of the Colossus remake, as far as the visuals go. You can either go with Cinematic Mode, in which the game will run in gorgeous 4K HDR, albeit at 30 FPS. If you don’t have a 4K TV, it will still super sample to improve the image on 1080p TVs. This one is tailor-made for the Photo Mode. The other option is Performance Mode, which runs in 60 FPS at 1080p. That one runs like an absolute dream, and I like it much better. 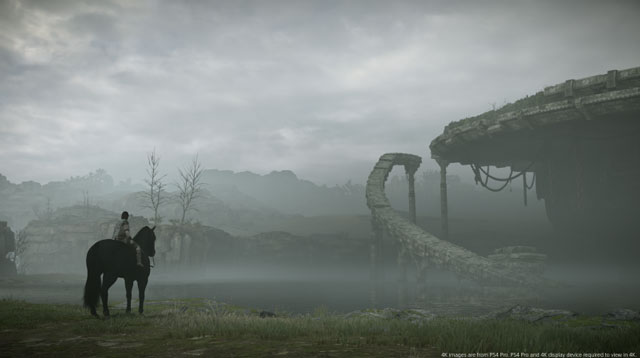 I won’t say a word about the story, because, if you want to experience Shadow of the Colossus, you should go in knowing as little as possible. As far as the gameplay goes, it’s largely exactly the same as in the original. I won’t go into details here, but I will say one thing. If you’re wondering whether or not the controls are just as clunky and stiff as before, wonder no longer – they are. Now, I’ve always maintained that the somewhat wonky controls added to the illusion of battling with actual gargantuan beasts that are doing their best to shake you off, and I still think so. That being said, it can get a bit frustrating. That being said, the world itself has never been this beautiful and it drew me in immediately. I often stop in my tracks to admire the amazing visuals, or just wander aimlessly, taking it all in. At one point, I fell off of a Colossus that I was fighting because I got distracted by how good it looks.

We’ll be covering the game further, and we’ll have the review up, once the embargo is down. That being said, I would just like to note that I’m enjoying this game thoroughly. It’s a wonderful trip down memory lane.