Now that Elden Ring has been updated to version 1.03, several things have been changed or nerfed. One of these is the Hoarfrost Stomp. Previously a fan favorite – especially against bosses, it is now a lot less effective against them. But, another skill has risen up to take its place – the Flame of the Redmanes. Similar to the Hoarfrost Stomp, this skill produces an arc of elemental fire when you use it, and has a good chance of staggering enemies. Of course, to be able to use this Ashes of War, you will first need to find the location for the Flame of the Redmanes in Elden Ring. Not to worry, that’s why we’re here. 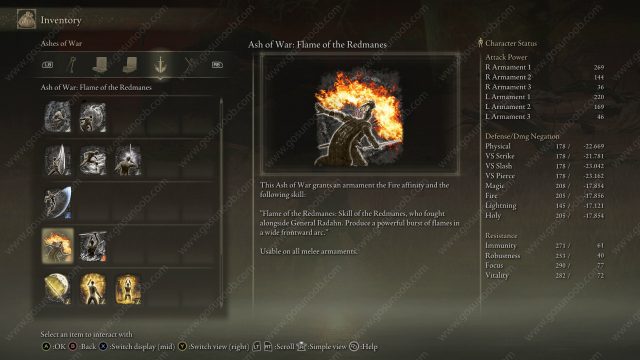 How to Get Flame of the Redmanes in Elden Ring

To get Flame of the Redmanes, make your way to Fort Gael in the Caelid region. We have marked the exact location where you should look in the screenshot gallery down below. When you get there, you will notice that there is a trail of frost appearing on the ground. This is what you are looking for – an invisible Teardrop Scarab. Position yourself in front of its path and quickly kill it. This shouldn’t be too hard to do, they are not particularly resilient.

When you have killed it, this Scarab will drop the Ash of War: Flame of the Redmanes. Its description states – “This Ash of War grants an armament the Fire affinity and the following skill: ‘Flame of the Redmanes: Skill of the Redmanes, who fought alongside general Radahn. Produce a powerful burst of flames in a wide frontward arc.’ Usable on all melee armaments.” Hopefully, this skill will last a bit longer until FromSoftware decides to nerf it. In any case, we advise you to get it as quickly as you can and to make good use of it in the meantime.