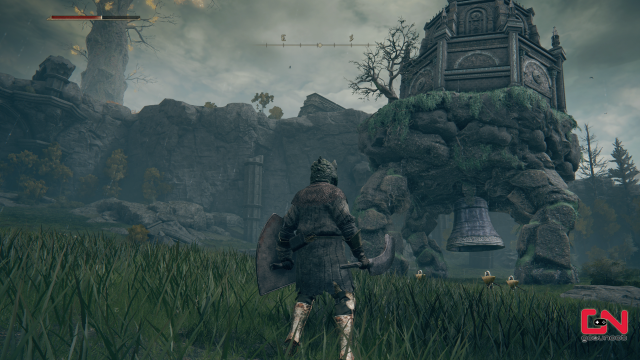 If you want to learn more about the Walking Bell Turtle Tower, there’s an Isolated Merchant’s Shack near the walking tower. Check out our map below for the exact location. There, you can buy a hint from the Isolated Merchant. He will sell you the Walking Mausoleum hint for 600 Runes (Souls from Dark Souls). The note suggests that we need to “clean up around its feet” if we want to stop and climb the Tower.

At first glance, the cleaning part might be interpreted as killing the headless soldiers roaming around the Walking Bell Tower. And that’s actually a good thing to do as our first step. But that’s not a solution on how to stop the Walking Bell Tower. Once you kill a few groups of soldiers around the tower, come closer to the tower’s legs. You’ll notice that each foot is dotted with shiny skulls. And that’s the cleaning part. You’ll need to shed off those skulls with your attacks. Don’t worry, the Walking Bell Tower will not react to attacks. Though you need to be careful around its strides or you can end up flattened.

The Bell Turtle Tower in Liurnia is a bit different compared to other walking mausoleums you’ll encounter. Like with others, you’ll also need to remove the glimmering skulls from it. But the skulls here are not around the legs. Rather, they are on the very top of the turtle, which we want to reach in the first place. You can utilise two tactics here. One is the good old longbow and arrows – try to hit them from the ground.

The second strategy requires a bit of patience. You’ll need to use a nearby Spirit Spring which will propel you to the cliff. Then, you’ll need to jump to a tongue-like platform just below the cliff. Go down to another two similar platforms just beneath the first one, until you are on the same level as the turtle’s upper parts. Wait until the Bell Turtle Tower come close enough, and then jump onto it. Clean the skulls and the turtle will lower itself and open the door. You can check out our video guide if you need visual instructions.

Now when you’re finally inside. You’ll see a dead body with which you can interact to open the Remembrance Duplication Menu. This menu will allow you to duplicate your Remembrance items, which you receive by defeating Shardbearers. These bearers of the Elden Ring shards are bosses that drop a Remembrance on death. You can use this item to either exchange it for a hefty sum of Runes or to receive unique heroic power. And with the Remembrance Duplication menu, you will be able to receive double the amount of bonuses from it, but don’t forget that you have only one use per Mausoleum.

Find Player and Have a Duel Genshin Impact

The Battlefield of Dice, Cats, and Cards is a new Genshin Impact event. It revolves…

If you’re stuck in Buzz’s RV in Disney Dreamlight Valley, you’ve come to the right…