Ashes of war in Elden Ring are special items that add new skills to your weapon and you may wonder how to use them. Almost all weapons, or armaments as the game calls them, have a skill attached to them. You activate it by pressing R2 on the controller. Some named and legendary weapons have unique skills. Ashes of war are special item that let you apply favorite weapon skills to your favorite weapon. You want to shoot winds out of your sword instead of just wildly swing it? Ashes of war are there for you. They are also used in choosing the weapon’s affinity. We’ll quickly tell you how to use the ashes of war in Elden Ring. 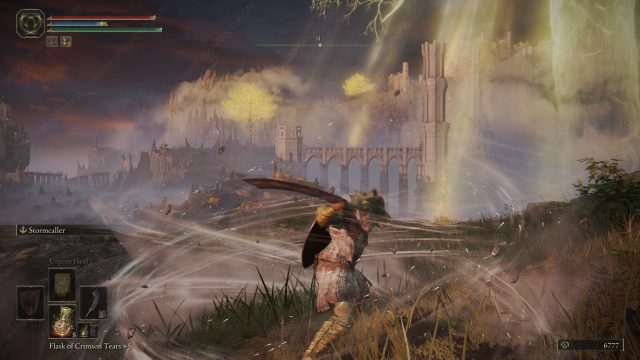 How to Use Ashes of War in Elden Ring?

To use Ashes of War in Elden Ring you need the ashes in your inventory, Whetstone Knife and a site of grace. Ashes of War are usually found on treasure goblins (or dung beetles). They can also be bought at a special vendor. He’s located in the Warmaster’s Shack bonfire in Limgrave. You’ll also need to have the Whetstone Knife item. This is found in Gatefront ruins’ underground. If you have all of these rest at the nearest site of grace and then select Ashes of War option. This opens the menu to apply new skills to your armaments.

Select the weapon you want to apply the skill to. Next step is to select the Ash of War you want on the weapon. Each ash has an affinity, which boosts a certain stat affinity of the weapon. Heavy boosts strength affinity of the weapon. This means that if you have a high strength stat you’ll get more bonus damage from applying that ash. Second thing to consider is the skill itself. Pick one you like the best and that can actually be put on the armament you want to use. Confirm your choice and that’s it. When you apply the ash of war on a weapon it replaces the current one. If you apply a new one, the old one gets put back into your inventory. 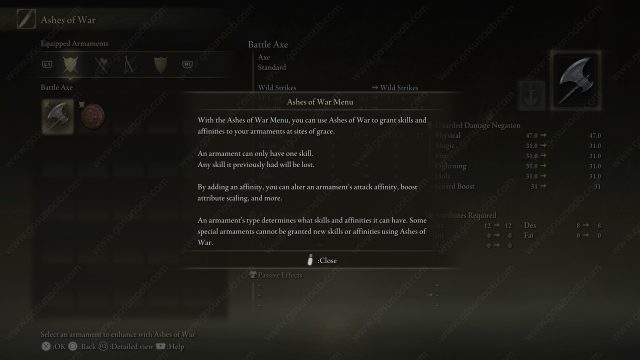 To use your newly equipped ash of war put the weapon in two hand mode and then press L2 on the controller. To use the shield’s ash of war skill you don’t have to use it in two hands. Just press L2. Great for parries.

To truly know how to use ashes of war in Elden Ring you need to know about weapon affinities. When you get a weapon it has an affinity towards some stat. This is seen in the weapon details screen in your inventory. Letters from F to A show affinity for that stat from lowest to highest. The more points you have in the particular stat the more damage your weapon does the higher its affinity for that stat is. Ashes of War can manipulate these affinities. Want a dagger to scale its damage with strength? Put on Ash of War with Heavy affinity on it. This provides unprecedented weapon customization for Dark Souls games. 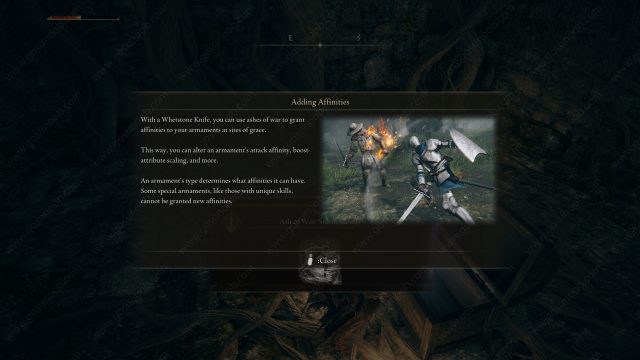 The affinities are Heavy (strength), Keen (dexterity), Quality (strength & dexterity), Sacred (adds Faith scaling and holy damage) and so on. Applying one affinity reduces other stat affitnities. When you get an Iron Whetblade item, you can use the ash of war and pick one of 4 affinities at your will. Iron Whetblade is found near the spider mini boss in Stormveil Castle, bellow the Rampart Tower site of grace. It is in the imp statue white fog barrier room left of the room with the spider.