If you are playing a magic-heavy character in Elden Ring, then Sorceress Sellen is going to be your go-to shopkeeper for all things magical. Available very early on, right after you defeat the Mad Pumpkin Head boss in Waypoint Ruins, she will supply you with Sorceries-type items. However, there appears to be another Sellen in the game. You can find this other Sellen chained up as a prisoner in the Witchbane Ruins. If you attack her there, this will also make the “original” Sellen turn hostile. But what is she doing there? Is there a way to free her? All of these questions and more will be answered in our Elden Ring Sellen Turns Hostile, Witchbane Ruins Prisoner Chained Up NPC Mystery guide. 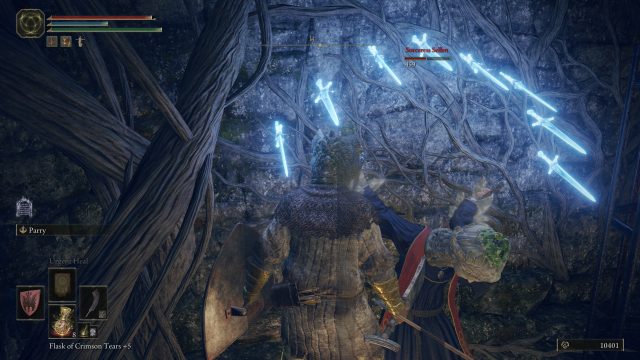 Can You Free Sellen From the Witchbane Ruins?

There doesn’t appear to be a way that you can do this. If you try to cut her chains by attacking them, you will only end up killing her. Doing this will also make the vendor Sellen from the Waypoint Ruins disappear. The same will happen if you accidentally lead an enemy there and they also end up killing the chained Sellen. But what’s very interesting about this is that, when you go back there, this chained-up Sellen will be back there again. So what’s the deal with this seemingly-immortal Sellen?

Well, this is all part of Sellen’s quest. Once you first meet her and agree to be her apprentice, you will be able to take on this quest in time. The next part involves finding Primeval Sorcerer Azur, near Hermit Village. Talk to him and get the Comet Azur Sorcery. After doing that and returning to Sellen, show her this Sorcery. Speak with her again and she will give you the Sellian Sealbreaker. Next, she will ask you to find Master Lusat, who is in the Sellia Hideaway. You will need to use the Sellian Sealbreaker to get to him. For the next section to be available, you will need to have defeated Starscourge Radahn.

Once you have accomplished that, return to Sellen and talk with her a couple of times. Go to her chained up version in the Witchbane Ruins. This version of her will give you the Sellen’s Primal Glintstone item. Next, journey to Three Sisters. You are looking for a dungeon that is located between Ranni’s Rise and Renna’s Rise. The entrance isn’t visible due to illusions, so jump up and down on the floor until it is revealed. There is a third version of Sellen in here. Give her the Sellen’s Primal Glintstone. Go to Redmane Castle and talk with Witch Hunter Jerren until you have exhausted all of his dialogue options. Go back to the Witchbane Ruins and you will see him standing there in front of her dead body.

Finally, go to Raya Lucaria Grand Library. There, you will see two summoning circles. You can either choose to help Sellen against Jerren, or Jerren against Sellen. Each come with their own rewards, but in our opinion – Sellen’s rewards are better, so we’d advise helping her over helping Jerren.

What to Do if Sellen Turns Hostile in Elden Ring

If you accidentally jump on her or attack Sellen in Waypoint Ruins, she will turn hostile and close up shop. Attacking the chained-up Sellen will have the same effect. So you shouldn’t attack her – both the Waypoint Ruins and the Witchbane Ruins versions of her – under any circumstances. Losing Sellen as a vendor can be devastating for Magic-using characters. Luckily, Elden Ring does posses something similar to the Absolution system from the Dark Souls series. In ER, this is called the Celestial Dew. You can purchase it for 7500 Runes from the Nomadic Merchant at Ainsel River. This is an underground zone beneath Liurnia.

Once you have this potion, you need to take it to the Church of Vows and use it there, so you can reverse your antagonizations this way. It is a way for you to again be on friendly terms with Sellen if you have angered her or killed her chained-up version.

If you do not want to spend your hard-earned Runes on purchasing the Celestial Dew, you can also find this item for free in a specific location. Like the Nomadic Merchant, this is also in the Ainsel River area. Since these underground tunnels can be confusing to navigate around, we’ve marked the place you need to go in the screenshot below. Loot the body hanging over the cliff there and you will get your free Celestial Dew. Use it wisely.

PREVIOUS POSTElden Ring How to Use Magic Spells