Besides the usual bug fixes and balancing, the 1.03 Elden Ring update has also added a very unexpected change to the game – a brand new character. This NPC is named Jar Bairn, and, if you couldn’t already tell from the name – it’s a living jar. Well, stranger things have happened in Elden Ring, after all. This strange little creature is the start of a lengthy quest that will see you interact with Diallos the Potentate and receive the Companion Jar Talisman once everything is done. We will be going every step of this quest in our in-depth Elden Ring Jar Bairn, Diallos The Potentate, Companion Jar Talisman guide. 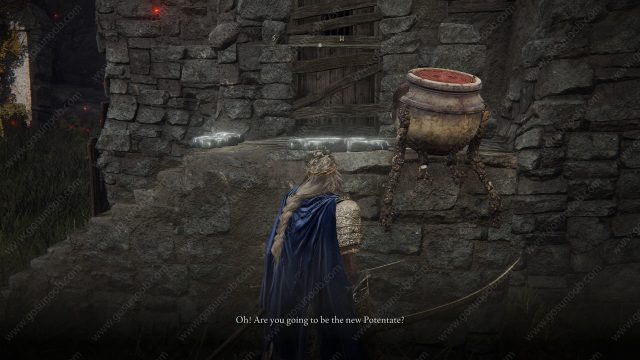 Where is Jar Bairn in Elden Ring

Jar Bairn can be found, appropriately enough, in Jarburg. This location is a part of the Liurnia of the Lakes region. Jar Bairn is sitting on some stone steps at the northern end of the village, near the Site of Grace there. Go and say hi.

I’ll Be Your Potentate or Not Elden Ring

When you talk to Jar Bairn, he will ask you if you are the new Potentate. You will be given an option of how to reply, either “I’ll be your Potentate.” or “I’m no Potentate.” No matter what you pick here, Jar Bairn will sadly inform you that your hands are far too rough to be a Potentate, and that a Potentate’s hands should be smooth.

What you need to do next is to respawn here several times (either by fast travel or resting at a Site of Grace) and exhaust all the dialogue options with Jar Bairn. At a certain point, he will ask you to help him with picking flowers. There are flowers all around Jarburg, so feel free to pick some. Once you have done that, go back to JB. Again, your job here is to exhaust every dialogue option and respawn until he mentions Diallos the Potentate.

To get Diallos here to Jarburg, you will need to have either killed Rykard, Lord of Blasphemy, or Juno Hoslow, Knight of Blood. In any case, you will know that he is here once Jar Bairn mentions that the new Potentate has arrived to Jarburg. Diallos The Potentate is in a nearby house. Like before, what you need to do now is to reload this area several times until the quest progresses again.

Tell Diallos He Protected the Jars or Not Elden Ring

After reloading the area a couple of times, get there at night to progress this. You will come back to see that Jarburg has been attacked. Diallos is lying in the center of the village, mortally wounded. He will ask you if he has defended the jars or not. You can either tell him “You defended them.”, or “I’m afraid not.” Whatever you choose, the result will be the same. So pick whatever you want, though our pick will always be to say that he managed to defend them and give a dying man some peace.

Speak with Jar Bairn and he will tell you that he wants to set off and become a powerful Warrior Jar, like his uncle, Iron Fist Alexander. This is an NPC that you will encounter over the course of the game. He, too, has his own quest. At the end of this quest, you will battle him at the Crumbling Farum Azula. When you win, you will get the Alexander Insides as your reward. Go back to Jarburg and speak with Jar Bairn. You will get the option to “Give Alexander’s Insides” or not to. Obviously, give them to Jar Bairn. Reload the area one final time. Jar Bairn is gone, but he has left something for you – the Companion Jar Talisman. This item raises the potency of throwing pots.

Note that you should be able to complete this quest (as in – get the Companion Jar Talisman) even if you have killed Diallos.