Chapter 7 – The Keeper starts inside the Church and takes you through Church’s catacombs. During this chapter you can expect to acquire a large number of crafting materials for Agony Crossbow Bolts.
▼Article Continues Below▼
They are acquired through trap disarming, and there are a lot of traps to be disarmed in this chapter. Chapter 7 atmosphere is quite claustrophobic. There are many tunnels, small rooms, situations where you have to react fast inside a small area while being chased by … 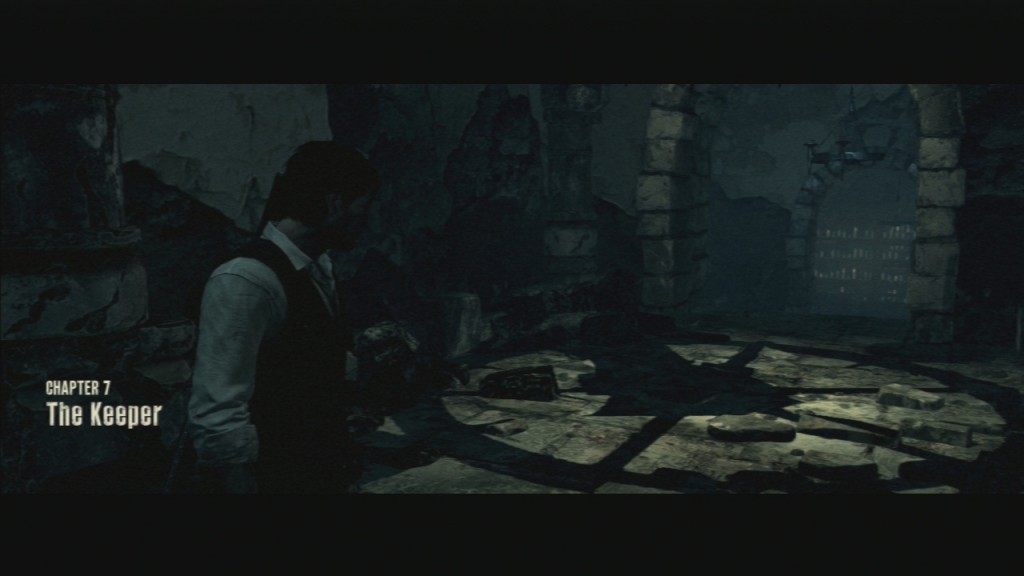 Once inside the Church collect Map Fragment 13. It is located on a table, in front of the large statue, next to a couple of candles. Once Joseph sits on a bench interact with him. After a short cutscene you find yourself at the start of a claustrophobic journey.

Following the only path inside the catacombs you come in contact with one group of enemies. While couple of them are inside the small room with many caskets the lonely one is at the end of the tunnel. Exactly at this point is where you can find a flashing picture carved on the wall. Get close to it and interact with it. It gives you the fifth Key Item History – Old Lithograph. It also opens the door of the hidden room. 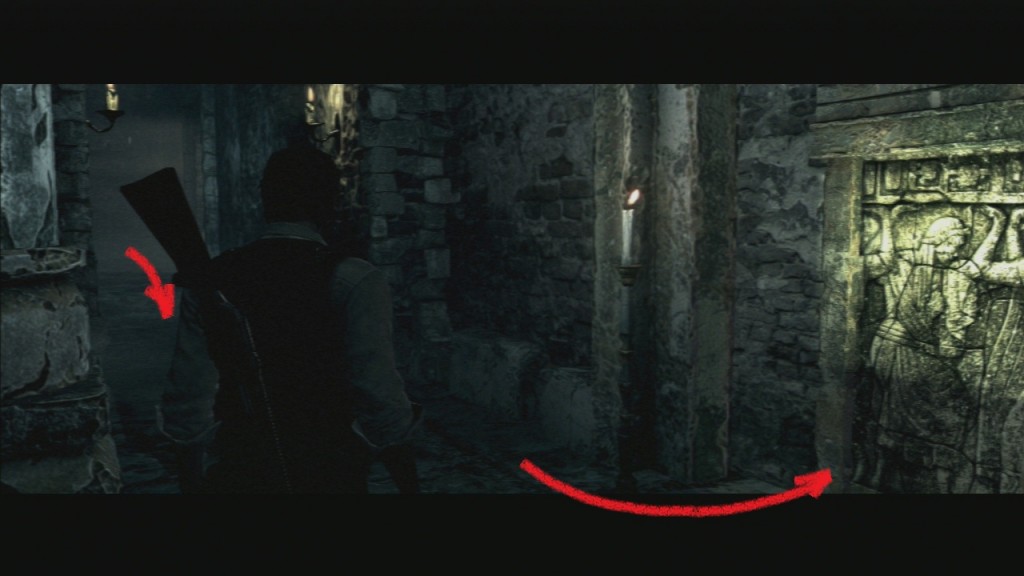 Inside the next room there is Document: “Catacomb Note” on the table, next to a Green Gel bottle. Once you leave this room and the game gets saved at Checkpoint TURN BACK. You can now unlock the small safe on a table, and reveal Key Location. Continuing further, path takes you to a gate with chains. Shoot its lock to brake the chains.In the center of the next room is a large cube shaped stone that has three holes in it. You’ll also notice two closed doors and one door with blood marks. If you are a lore collector go inside the room with blood marked door. First step is to collect a personal document: “Lily’s Birth Announcement”. Step two is to use the mirror to reach Hospital’s main hub. You should find additional lore there, like Newspaper: “Catacombs Found” and Missing Person Posters: “Chris”. Head back to the catacombs now.Place the first Lithograph you have inside the cube shaped stone’s central hole. Previously closed doors become open. Pick one of the just opened doors and go through them. At the end of each path you can find one Lithograph. Collect next two Lithographs and place them at the same stone. This action raise up the stone revealing a new path.

If you choose to go inside the tunnel across from bloody sign door you end up in part of the catacombs with prison cells. Path is rather straight forward, you can’t get lost. You’ll have to use a couple of gas valves to go through certain parts but nothing too complicated. At the end of this path there are long ladders. Once you use them you come to the Lithograph. Doors behind it opens and you are back at the central room with cube shaped stone.

If you choose to go inside the tunnel just next to the bloody sign door you end up in a part of the catacombs with a large number of traps and enemies, hidden places and more. The first larger room you enter hides both key and audio tape collectibles. Audio tape: “Guardian” is sitting on top of the only table there. Stone statue that hides the key can be accessed through a trap. Use the only control switch in the room. It brings down the spike trap. Climb on top of it and wait until it raises up. You should now see a stone statue containing the key.Continuing further we arrive inside a room without an exit. From the tunnel you came from shoot toward the two manual switches in the distance. They lower a large trap from the ceiling. Just before the trap goes up again you can step up on top of it and ride it to the top.Next room is slightly larger than the previous ones. It has a huge spike trap that is above the pit between your location and where you should go. Use the small crouch tunnel to reach this part. This is where it gets tricky. At this part of the room is a manual gate switch. As soon as you start using it a large number of monsters comes rushing toward you from nearby doors. The best way to defeat them all is to use the large spike trap (and that saves some ammo as well). Run toward its switch and use it instantly. Once it drops you can walk on top of the trap. Monsters will follow you on topp of the trap but they are so slow that the trap will start raising and squash them against the ceiling. Repeat process to save ammo.

Gosu Tip: Monsters don’t like obstacles. Once they come across an obstacle and stumble, they fall down. As they need some time to get up you can easily kill them with melee attacks.
Once all the monsters are dead don’t use the manual gate switch again. Instead of that go through the doors the monsters had come through. Doors lead toward a tunnel with many traps. Ultimate prize waits at the end of it. You get a large number of Green Gels and one stone statue with Key Location. Get back and use that manual gate switch now.Another room, another trap. Go to its switch and use it. Once if falls down jump on top of it. As it goes up look around for a hidden tunnel entrance. Enter it while the trap is rising up. Inside this tunnel, in a box in front of a small stone statue, is another key location.Once you have placed all the Lithographs the cube shaped stone raises up and a new path is revealed. 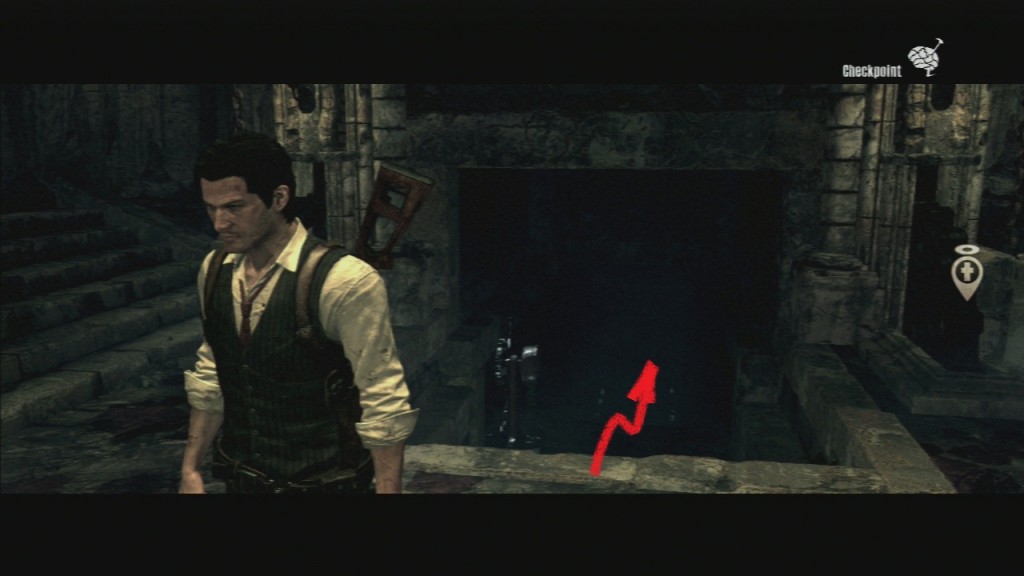 Reach the other side of the newly revealed hallway by avoiding mine traps. Free one of your group members by shooting at the lock. Shortly after that you will be able to use the manual door switch. This activates a short cutscene. New monsters arise. Safe-Head Guy is here – or as the game calls it – The Keeper!

This monster is easier to kill than the previous stronger monsters, but he has more than one “life”. It drops mines. Don’t step on them. You can disarm traps but do it once the monster is dead. It goes down after you shoot him with 2 sniper shots or two explosive bolts or couple of shotgun shots…The first time you kill the monster entire area gets filled with deadly gas and a nearby door opens revealing a new room you can enter. Once inside you should pay attention to an unused handwheel on the table and then try to turn off the deadly gas with the valve on the wall. Safe Box Monster pops up again. Kill it and enter next room to use another valve on the wall. Repeat this until the monster decides it had enough and breaks one of the valves on the wall. Go back to that first room and pick up the unused handwheel from the table to close the last valve.

Going further down the path takes you to the area where you can finally dispose of Safe Head Monster. Killing him at this point gives Achievement/Trophy “What’s In The Box?!”.