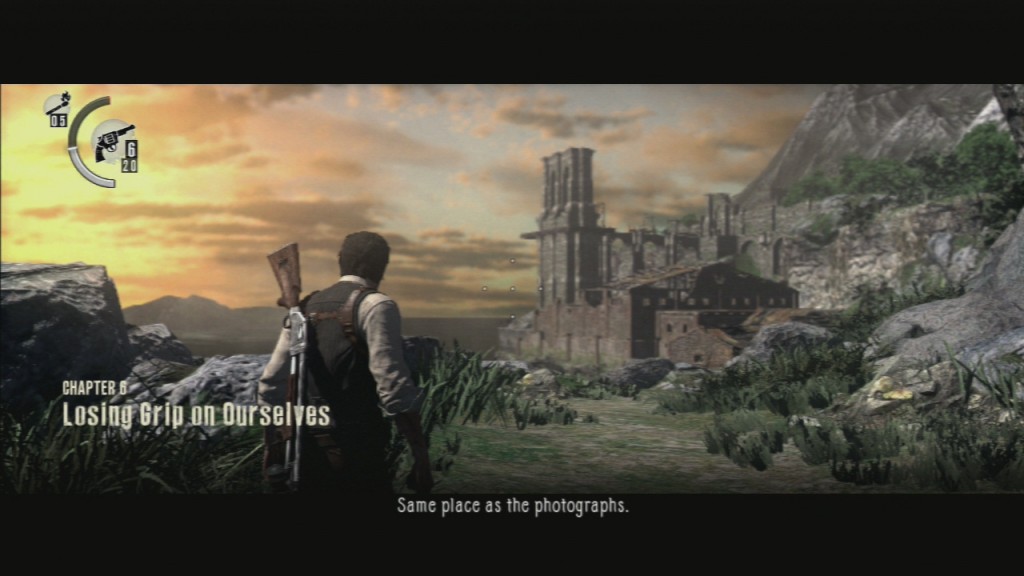 The six chapter starts with a short cutscene in the hospital’s main hub. When you collect a Newspaper “Church Floor Collapses” from the table, several pictures will appear.
▼Article Continues Below▼
Take a look at them. From the hospital’s central room go into the hallway, and you will see the nurse. She leads you towards a new hallway. Enter the last room and the cutscene will start. After that jump onto the boxes and leave the room through a hole on the wall.In the next room go up the stairs. The paths leads you outside the ruined hospital. In the distance you will see the church from the picture. In a small ruined house next to the church, take the key from the statue behind the hanged man.When you enter the church, enemies will start climbing up the wall. Your job is to kill the enemies while Joseph is unlocking the doors. Every time Joseph unlocks a new door you’ll face a new wave of enemies, that are falling through the ceilings. Your best option is to shoot the red barrels when the monsters are next to barels. Don’t forget to loot items whenever you can. There is a possibility to get new weapons like Sniper Rifle or Agony bolts / Flash Bolt.After the last door you will enter the central part of the ruined church where you’ll face many different enemies. Joseph will help you while fighting the enemies. Turn left and follow the path towards the church tower. If you activate generator in the first room, you will be able to pull the switches across from you. It will open the yellow door where you can get additional loot.

How to enter the church tower

The church tower is guarded with enemies hidden in four manual elevators hanging around the stone tower. When one of them starts shooting bolts at you a wave of enemies will attack you. Take advantage of this situation, and lure them to your location and let the monster kill the enemies with its bolts. Your second option is to hide behind Joseph and let him kill them all.When the elevator window opens shoot at the monster inside and the construction will fall down when you kill the monster. After destroying all of the manual elevators go towards the green door at the bottom of the church tower.Note: There is a Key Stone Statue on top of this tower. Shoot it down and collect the key at the bottom, next to the doors. We would like thank user Jose silva for additional information.

How to defeat Chainsaw guy

When you approach the green door, a guy with the chainsaw appears, and all the doors around you will be closed. His only weak spot is the moment when he raises the chainsaw. Shoot at him and he will fall down, than use the situation to make a couple of easy shots. He will raise the chainsaw whenever he come across a small wooden fence or when he is very close to you. You’ll get +5000 Green Gel points for defeating him.When you enter the church tower go up the stairs, and go through the blue door. On the locker on the ground collect “Journal Entry May 2006“. Use the mirror in the room and collect “KCPD Officer Missing” newspaper. Return to Joseph, collect Map Fragment 11 (thanks to user Some guy) and burn the dead body in the elevator to unblock the door. The elevator will take you to the last floor.

How to save Joseph

While you are crossing the bridge, there will be a huge explosion and the enemies will capture Joseph. Use Sniper Rifle quickly, and kill both monsters. After that Joseph will hep you reach the other side of the bridge. While he’s unlocking the door gate kill all the enemies around you. Go towards a stone statue and loot a chest behind it. Search the market place and collect audio tape “Ernesto Victoriano“.Key Location: Destroy the boxes to the right of the butcher stand. They reveal a hidden entrance. Follow it and you’ll find the stone statue. Behind the market place, enter a graveyard and after a short cut scene collect the Map Fragment number 12. In the next room use the mirror to collect new photos and newspaper “Church Investigation” and Missing person poster – “Pastor Graciano“.

How to defeat two giants at the graveyard

While wandering through the graveyard you will face 2 giants. The first one you can easily defeat if you hide behind the metal fence. While fighting the second one hide inside a monument close to the last building. After defeating the giants you will complete “Two on Two” Achievement / Trophy.When Joseph calls you to join him next to two stone horses statue collect a document “Graveyard Note” in front of the statue. 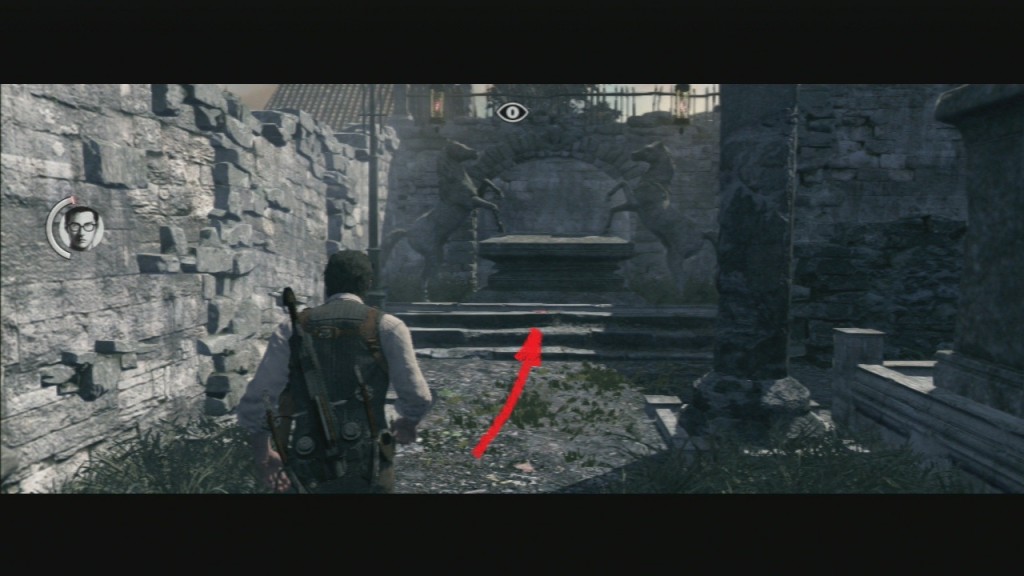 Once you enter the room with numbers 3, 5, 7, 9 on the wall and sacrificial tables, you should look out for a small hallway/side room through which meat bags are being transported through. There is a statue on one of the meat sacks moving through the hallway. Wait for it to get to you, then smash it for another key. Use the metal bars next to the sacrificial stone tables to lower the tables with numbers 3, 5 and 9, and raise table number 7, then go through the tunnel that opened. In the next room enter the cage that takes you to the second floor. Collect a document “Cemetery lab note #1” next to the room’s entrance. Next document: “Cemetery lab note #2” is located close to the previous one. It is on the ground, next to a dead body, at the start of the area where the caged animal is sleeping.

Fighting the animal monster in the garden

You can’t kill the monster animal, you can just scare it away when you do enough damage. Monster hides in the bushes and you can’t damage him then. Wait for it to emerge and shoot it with your weapons. Best tactics is to use your Agony Crossbow to stun the creature while it is outside the bushes and do damage until it runs away. This will trigger Jason cutscene where you hide behind a gate, but you have to come back for his glasses. Monster is still around, but you can avoid the fight while Jason distracts the monster. Just get the glasses and run back to Jason and the gate. If you however decide to kill the animal monster it drops 7 000 Green Gel points.Mission ends when you approach the church’s entrance. 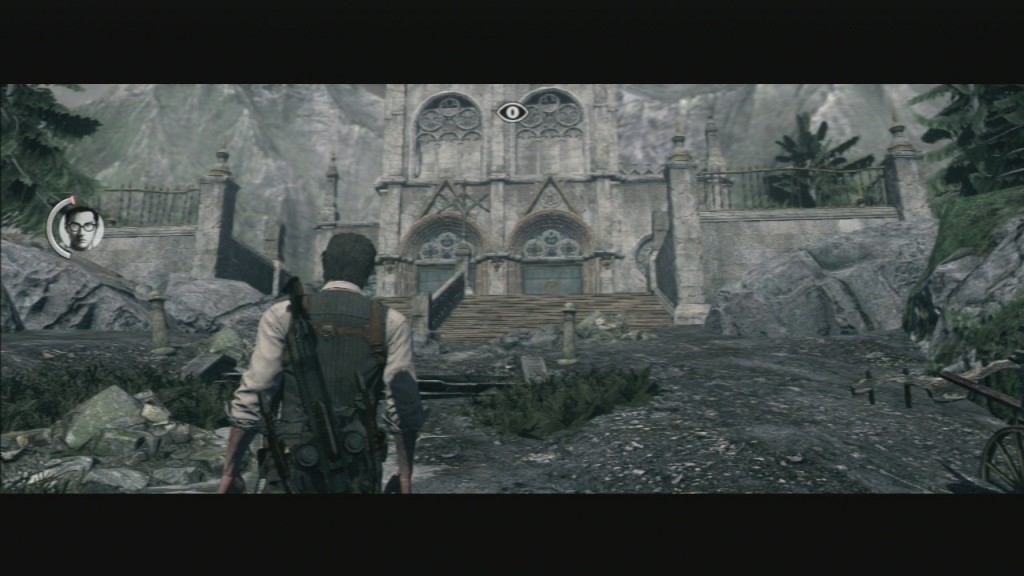