Holotape Games are mini-games you can play on your Pip-Boy in Fallout 4. There’s five of them, and all except the first one have to be unlocked. After you play any one of them, you’ll earn the Future Retro achievement. This guide will show you all holotape games in Fallout 4, how to get them and what they look like. 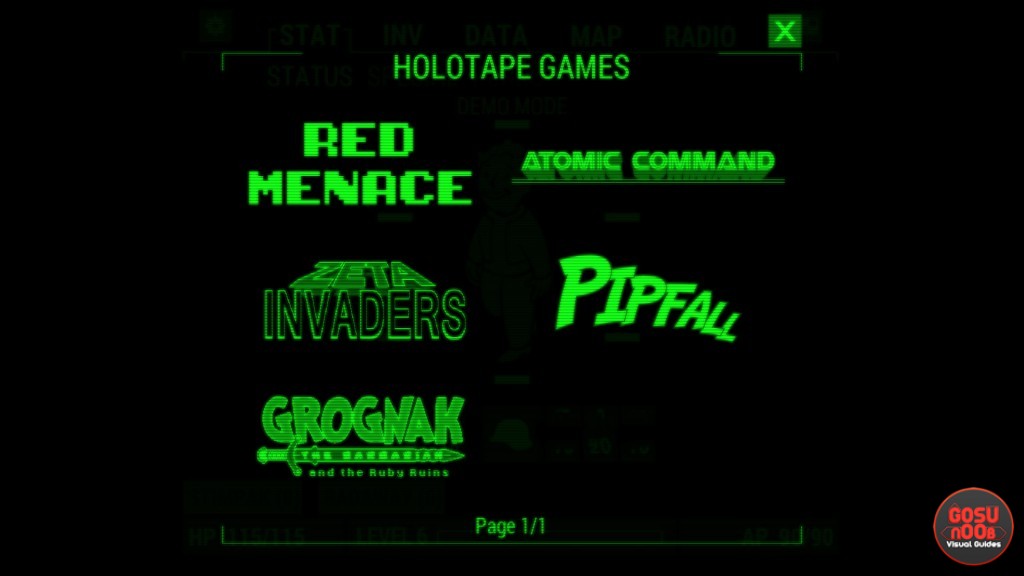 You’ll access these games through your Pip-Boy, in the Misc tab of your inventory.

Atomic Command is the first game. It looks and plays like Missile Command – you shoot down rockets trying to destroy different cities on Earth. If you’re not interested in the others, you can just play a round of this and unlock the Future Retro achievement. You’ll find it in a Robco Fun magazine in the Museum of Freedom in Concord.

Red Menace is a re-skin of Donkey Kong. A Chinese-flag monster has kidnapped a woman and climbed a building. You have to get up there to save her, while he throws barrels and shoots missiles at you. It can be taken from a terminal in Vault 111, before you even enter the Wasteland.

Zeda Invaders is a clone of Space Invaders. You pilot a vehicle and have to shoot down rows of invading aliens, while they slowly creep towards you.

The next game is Pipfall, a Pitfall clone. You play a Vault-boy/Indiana Jones crossover, and have to traverse a dangerous jungle and collect five bobbleheads.

Grognak The Barbarian and the Ruby Ruins

The final holotape game is Grognak the Barbarian and the Ruby Ruins. It’s still unclear whether this is a text adventure, or a Dungeon Master style RPG. What’s certain is that you are the eponymous barbarian, and you begin by rounding up an adventuring party.