Robert MacCready is a mercenary sniper in Fallout 4 that you can recruit as a companion to use throughout the game. He can be of great use, provided you’re in the mood to think about his positioning. This guide will show you how to recruit MacCready, how his perk and abilities help you and how to increase his relationship levels for engagin into a romance.

There is an independent city of Goodneighbor by the coast. You can enter Goodneighbor at any time and there are several buildings and vendors around. You need to enter the Third Rail bar. Go into the back room of the bar to find MacCready. During my playthrough he was speaking to two other gentlemen, so you get some backstory that way.

How to get MacCready

He is a mercenary and the way to recruit him is to pay him money. He initially asks for 250 bottlecaps to fight for you, but if you have high charisma you will be able to pursade him to come with you for 200 bottlecaps. From then on you can use him as your companion. 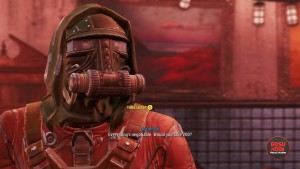 Abilities: He is a sharpshooter. He comes equipped with a sniper rifle with infinite ammo. His accuracy is great, but if you want him to provide cover fire, you’ll have to position him yourself. He’s good with other weapons as well, if his default approach doesn’t suit you.
Perks: Killshot (+20% chance of headshots in VATS)

How to improve relationship with MacCready

MacCready is a viable candidate for romancing. Finishing his quest will make him like you more. Given his history (he appeared in one of the previous games), it’s safe to assume he’ll look kindly upon helping children in need.