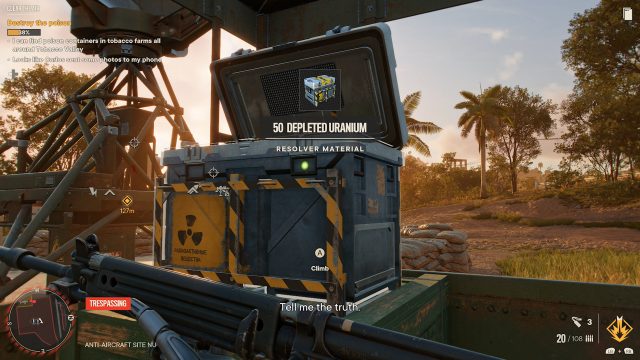 Like we mentioned, Depleted Uranium is always found close to Anti-Aircraft cannons. While you don’t need to destroy them to get the uranium, doing so will liberate the airspace of that region and allow you to fly there. If you are unsure how to do this, we have a guide that explains how to destroy anti-aircraft cannons. To be able to get the “Friendly Skies” trophy, you will need to destroy at least 16. And, you will need a total of 1400 Depleted Uranium to obtain all the Supremos and Resolver Weapons to get the “Backpacking” trophy. You get 150 Uranium at the beginning, which means that you will need to loot almost every Anti-Aircraft cannon location.

Every one of these Anti-Aircraft cannons is marked on the map below. The starting zone, Isla Santurio, has just one Anti-Aircraft cannon, codenamed Iota. Madrugada has seven: Gamma, Nu, Eta, Omicron, Pi, Phi, and Tau. The Valle De Oro region has nine: Alpha, Beta, Omega, Mu, Delta, Sigma, Kappa, Upsilon, and Epsilon. El Este has the following: Chi, Sampi, Ro, Theta, Xi, Psi, Lambda, and Zeta. The Isla Del Leon to the north is where Castillo Prime, the final anti-aircraft cannon, is located.