There are several Mythical Animals in Far Cry 6 that you will be able to hunt down to get unique rewards, and one of this is the fearsome Mamutito Boar. You will first encounter the mention for this Mythical Beast in Armonia. After you read the bounty notice for this killer hog, a new area will open up called Mamutito’s Glen. In this Far Cry 6 Mamutito Mythical Boar Animal Location & Reward guide, we will go over this entire hunting mission, including the best ways to deal with Mamutito, and what your reward will be for taking out this boar. 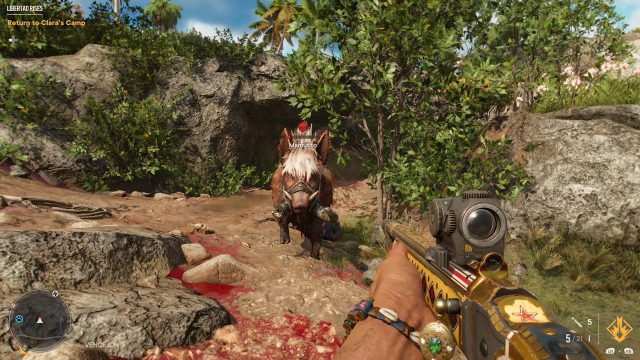 How to Defeat Mamutito the Mythical Boar in FC6

Mamutito’s Glen is directly northeast from Armonia, in Vencejo. Head there, but be prepared for a tough fight. Once you enter the glen, you will encounter a pack of aggressive, wild hogs. They are highly mobile and will attack you up close. So, it’s important to not be stationary when fighting them, but to always be moving and try not to let them out of your sight. Soon, Mamutito will also join the fight. It’s best to first take out all the other hogs and then concentrate your fire on Mamutito until you bring it down. Since there is a ridge around this glen, a viable strategy is to get on top of it, find Mamutito (it is always in its cave in the center of the glen), and snipe it from afar where it can’t reach you.

When you have managed to kill it, Mamutito will drop the Mamutito’s Tusks. Like with all Mythical Animals, you will be able to trade this trophy at the Hunter’s Lodge in the Guerilla camp. The Hunter’s Lodge will be unlocked once you leave the starting island and start one of the other big regions. When you turn in the Mamutito’s Tusks here, you will receive the Primal Mask as your reward. This 3 star head gear will grant you Predator Sense. It allows you to automatically tag nearby animals. Not to mention, it also looks very intimidating and badass.