The Final Fantasy XV second character DLC, Episode Prompto, recently got an interesting story trailer, and it’s rife with spoilers. It is a story trailer, after all. The new-old characters that appear in this episode make Episode Gladiolus look pretty empty. The gameplay shows diversity by shifting mostly to a third-person shooter with elements of melee combat.

The Episode Prompto story trailer starts off after the events that took place in Chapter 11 of the main story. I wouldn’t say it is the exact moment after the Chapter 11 ending sequence, since Prompto is in a snowy area, but it happens shortly afterwards for sure.

Separated from the group and alone in an arctic environment, experience an untold story as Prompto fights to discover the truth behind his origins and to take control of his own fate.

On his journey throughout this episode, Prompto will have help from Aranea Highwind, who makes a return together with other characters, like Ardyn Izunia and Prompto’s father Verstael Besithia. He will for sure need a lot of help, as he battles his way out while trying to keep his sanity.

Players can expect more than what we’ve seen in Episode Gladiolus. There will be side quests, snowmobile riding, an open world map somehow and, by the looks of the story trailer, large bosses like the level 99 Kaiser Behemoth, level 42 Bandersnatch, level 47 MA Hoplomachus and my favorite, the level 55 Unit SAS-0822: Barbarus. 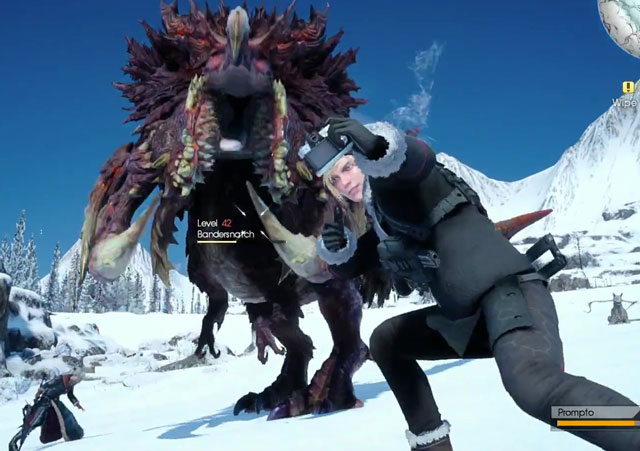 The music in Episode Prompto is also stunning. It is different from the main game, and it is the work of Naoshi Mizuta, who talks about the challenges he faced in the guest composer trailer. Although the story trailer has a lot of gameplay footage, there is also the the Episode Prompto gameplay dedicated trailer. Here, we can see Prompto going through the first Magitek production facility, trying to find his way out with the help of a bazooka.

Episode Prompto is coming out on June 27th, 2017 worldwide on all platforms. It is a part of the $25 Season Pass, but you can also get it separately for $5. Episode Gladiolus was the first DLC from the Season Pass. The next one in line should be either Episode Ignis or Multiplayer Expansion: Comrades. You can get them all as a part of the Season Pass or individually.