If you are excited to play Final Fantasy XV Episode Prompto, try out new weapons like a sniper rifle or an SMG, you might also be interested to know that the guest composer on the upcoming DLC is the renowned composer Naoshi Mizuta. He is famous for his work on games like Final Fantasy XI and Final Fantasy XIII-2. In this trailer, he talks about challenges he had to overcome for this episode.

Episode Prompto is coming soon, near the end of June 2017. This was announced during the Final Fantasy 30th Anniversary Yokohama Special Live Broadcasting, along with the name of the person responsible for its soundtrack, the Regalia Off-Road Type-D, Noctis’s “Cup Noodle Style” headgear, free updates and more.

The composer Naoshi Mizuta mentions at the start of the trailer how he composed Prompto’s theme song and other songs in the DLC. What is interesting about this episode is how important the approach to the theme was for the entire team. Naoshi speaks about expectations he had to meet during this task. The lengthy explanation about Prompto’s background and backstory was an additional motive for Mizuta to put a lot of effort into his new work.

We see Prompto as an upbeat mood-maker in the main game, the one who is always happy and silly. This episode will allow us to get to know a different side of him. One that reveals his deepest inner thoughts and possibly some unexpected twists and turns.

This episode will for sure explore the events that happened during Prompto’s absence from the main game in Chapter 12. If you remember, he was pushed from a rooftop of a train, and we find him again two chapters later. 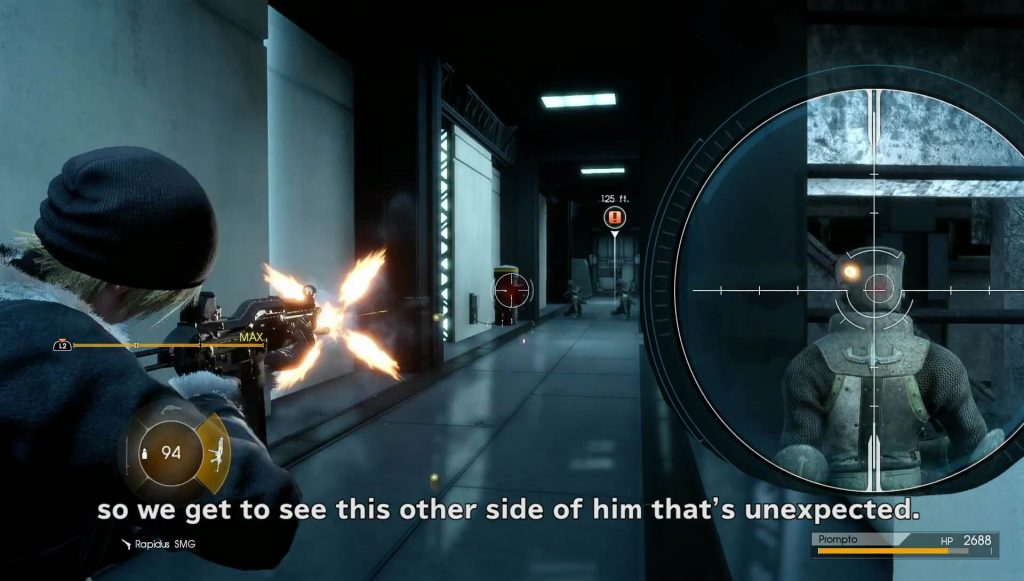 If you pay close attention to the trailer, you can even spot the small portion of Episode Prompto gameplay. At the 1:33 mark, Prompto is sneaking in what appearsto be the Zegnautus Keep from Chapter 13. We can see that he can use more than one weapon, even three of them at one time: Rapidus SMG, Sagitta Sniper Rifle (you can even see the bullet flying) and a sword. This for sure looks like a whole new gameplay style for FFXV, as we battle our way through a third-person shooter. All this to find a way out in a mission called “Life in Captivity”.

NEXT POSTGTA Online Gunrunning Update is Now Live on all Platforms