Character Attire Customization consists of several different outfits for each character. They come in standard and no jacket edition. While playing you can change them at any given time. You don’t need to approach a shop or an NPC to talk to in order to activate the new look. Here’s everything we know about Final Fantasy XV outfits. 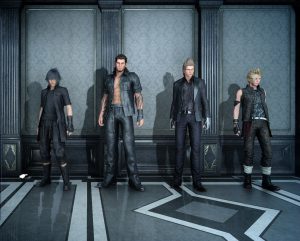 How to customize characters in Final Fantasy XV

From the main menu go to the gears section, choose the character and look for the Attire tab in the lower left corner of the screen. This option brings up an additional menu with owned outfits. From here you can check out the costumes and choose the one you want to wear. You can perform this action anytime you want. You might be forbidden to do so only while in combat.

If we are to make a conclusion from the information gathered so far, we can say that there are four basic attire sets.

The purpose of the character customization besides the new stylish presentation is a change of stats and buffs as well. Yes, it is true, different outfits give different stats with different buffs.

These are not the final outfits in the game. Some of the attires come in different purchasable Final Fantasy XV editions. For example, you can get the Royal Raiment outfit with the Ultimate Collector’s Edition, the Royal Raiment Suit when you buy Kings Glaive on PlayStation and more. Check out our guide on Preorder Bonuses & Editions.

Noctis has two basic outfits. Like the others, they come in jacket and no jacket variants, making it a total of four. Prince’s Fatigues is the most famous one as it is shown on almost every trailer. Casual outfits gives him a white color shirt with a cap.

Gladioulus, childhood friend of Noctis, likes to wear Crownsguard Fatigues without the jacket. Who wouldn’t with those glorious biceps.

Ignis Scientia likes to wear gloves in all of his outfit customizations. That wouldn’t be weird at all if he was not the party’s chief.

Prompto Argentum, unlike the other characters, doesn’t like the jackets with long sleeves.

During chapter 8, part “A Precious Source of Power”, Noctis will wear this suit. Luckily for us, you can find it near the Power Plant later on in the game. This time everyone can wear it. There is only one suit, so take a pick! We’ve made a Thermal Suit Location Guide.