Locate a Trask transport truck is one of the week 5 challenges in Fortnite Battle Royale. In order to complete it, you’ll have to find the mutant transport truck that is hidden somewhere on the map. It can’t be seen from the air, so scouting the map while you land won’t do you much good. If you’re having trouble finding it, our Fortnite Trask transport truck location guide will help you.

We’ve already mentioned it’s hidden from view. It’s not in a garage or anything, but it is under some trees with particularly rich boughs. You’ll find it in the northwestern corner of the map, southeast of the lighthouse. There’s a tiny settlement there – only a few houses – but you’ll immediately spot something out of the ordinary. There’s a big patch of land that looks like it was scooped with a giant shovel and placed there. On it is a piece of an equally dismembered highway, and the truck is on it. 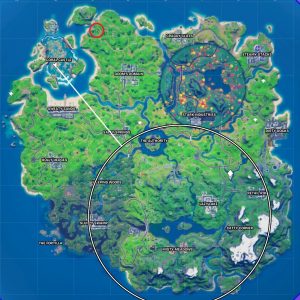 It’s a big, purple thing, so you won’t mistake it for a normal truck. Simply approach it and the challenge will be completed. It’s the kind of truck they use to transport prisoners with superpowers in. It probably has extra thick walls and stuff, but you’ll find it open, which means someone made a daring escape. Maybe it’s Wolverine, who’s been added as a boss recently? Maybe it’s someone even more terrible, someone we’ll only get to face later on in the season? You know how these things go – Epic likes slowly unrolling the story as the season progresses, so it might have something to do with an enemy we’ll face in the coming weeks.

Since you just need to approach the vehicle, it’s one of the easiest challenges this week. Blood-thirsty players won’t be able to stop you from completing it – simply wait for a match in which the battle bus passes near the truck and land there.