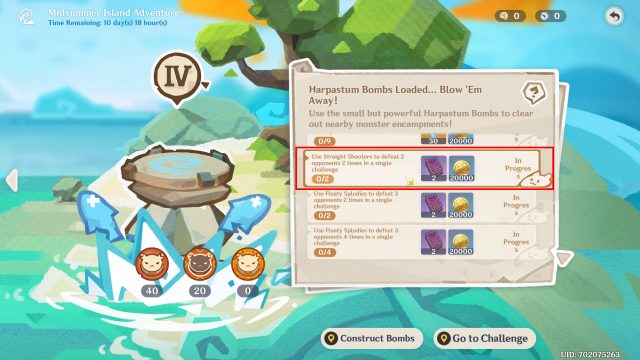 How To Use Straight Shooters To Defeat 2 Opponents Genshin Impact

Harpastum Bombs, including the Straight Shooter bomb, are used similarly to the Wind-Blessed Harpastum. First off, you need to craft Straight Shooters. For this, you will need 1x Flaming Flower Stamen and 1x Frog. When you craft one Straight Shooter bomb set, you will receive 20x of them in your inventory. So, be careful not to craft too many, otherwise you may get the No Space Left in Inventory message. Next, you should be aware that you can only use these bombs in designated areas. You will be able to recognize these enemy camps by their Dodoco icons on your map.

When you have crafted a set of Straight Shooter bombs, go to one of these enemy camps. Here, you will be able to equip your Straight Shooters. To do this, go into your gadgets inventory. When you select this bomb, it will go to your gadget slot (Z by default on the PC). Then, when you press the Z button, you will be able to use with the Skill key (E is the default key binding for this on the PC). Hold E, aim towards the enemy, and release it when you are certain you can hit them. The Harpastum Bombs don’t have a lot of range, so this is best used when the enemy is near you. If an enemy hits you while you are aiming, this will cancel the aiming action. The Straight Shooters are powerful single-enemy bombs and can usually kill smaller mobs in just one hit. If a larger mob is carrying a shield, the Straight Shooter will take out the shield first, and the second one will damage the mob itself.

Another important thing to note is that the game won’t notify you when you’ve completed individual objectives – only when you’ve finished the entire challenge. So, to see if you’ve fulfilled all the necessary “Use Straight Shooters to defeat 2 opponents 2 times in a single challenge” criteria, you will need to go to the “Harpastum Bombs Loaded… Blow ‘Em Away!” challenge screen. Thank you for reading our Use Straight Shooters To Defeat 2 Opponents Genshin Impact guide. If you followed all the instructions here, you should be able to quickly complete this objective.