Though V Rising is a survival game first and foremost, it does a lot of elements differently than most games in this genre. This is because in V Rising, you are playing as a powerful vampire. Naturally, this expands the gameplay features available to you, which include shapeshifting, hypnotism, and other such classic vampiric powers. Of course, being a survival game, you will still need to collect quite a few more down-to-earth resources, which you will then use to craft gear and build structures. One of these is the best source of Omega-3 fatty acids in the real world – Fish Oil. While it doesn’t seem to have a lot of uses in the early-to-mid game, its usefulness becomes quite apparent in the late game. As such, you will want to farm as much Fish Oil in V Rising as you can. We’ll show you how. 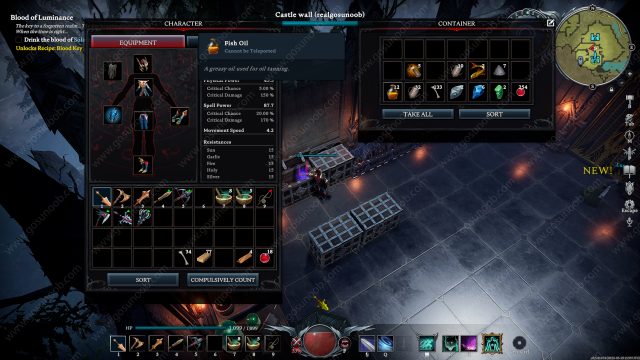 How to Get Fish Oil in V Rising

The reason why Fish Oil is so important is that you need both it and Pristine Hide in order to get Pristine Leather. Now, as for Fish Oil itself, there are several ways you can acquire it in V Rising. The first and most obvious way is to get it through fishing. For this, you will need to craft a Fishing Pole from the Woodworking Bench with the following materials: x8 Planks, x4 Coarse Threads, and x4 Copper Ingots. Once you have made this, go and look for a nice fishing spot in Farbane Woods.

Once you have successfully caught enough fish, take it to your Devourer Chest and put them inside. You will then get an appropriate amount of Fish Oil (and some Fish Bone) in return. Besides this, another reliable way to farm Fish Oil is by defeating enemies around Dunley Farmlands. These often drop Fish Oil when you kill them.