Gwent is the Witcher card game that is currently live in the beta phase. It is interesting because of the number of combinations and possibilities in duels and the variations on how you can beat your opponent.
▼Article Continues Below▼
With that said, you have to have a strong knowledge of your deck, and the opponents deck, and the cards in general. In this guide we are going to show you some of the Gwent tips and tricks that should help you master the game as soon as possible. 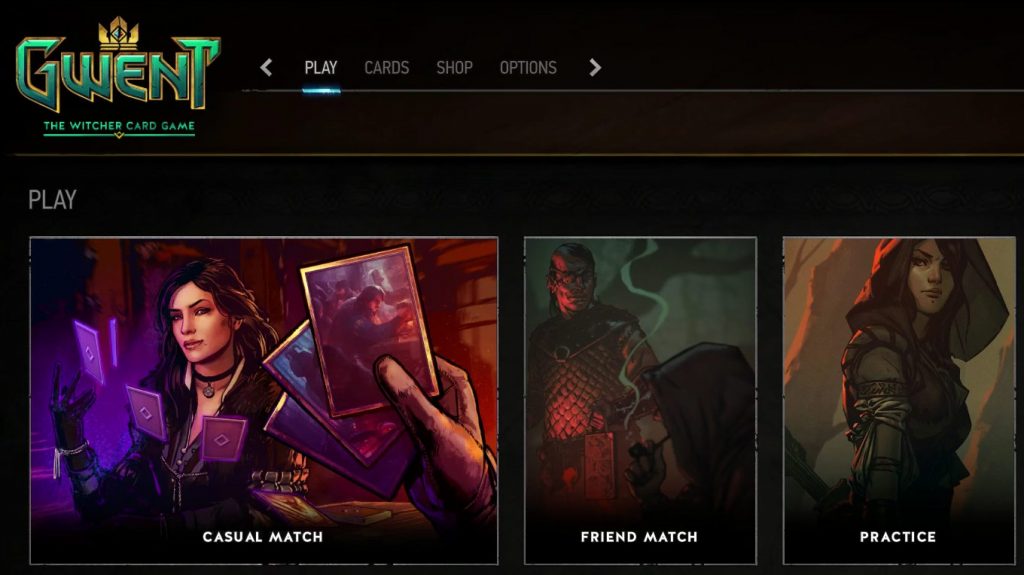 Losing a round in Gwent

Gwent is a game that is played best in 2 out of 3 rounds. This means that you have the luxury of losing one round. Always bear that in mind. Even if you see that the opponent is gonna win a round, don’t get discouraged and use it to your advantage.

Passing a Gwent round

Always remember to stay one step ahead. If you have cards that remain on the board in some way, you can play them before passing to give you a head start.

Avoid passing the first round. It can give you a card advantage, but you can lose that easily trying to win both rounds.

Planning ahead in Gwent

The initial draw in Gwent is ten cards with three mulligans. You draw two extra cards after Round 1, and one after Round 2, and that’s it. Always plan at least one step ahead. Keep in mind the combos you can do with the cards you have. Unless you want to bluff, don’t play strong cards right away. Keep the opponent guessing.

If you win the first round, don’t work too hard on winning the second one. Let your opponent spend cards, and pass the round at your leisure. This is why passing the first round is not always a good idea.

As in any card game, bluffing is essential in Gwent. There’s more than one way to do this.

The first one is intimidation. Scare your opponent by opening with a strong card, preferably a gold one. Make them think there’s more where that came from and force them to use cards to catch up. Bear in mind, this is a risky play. If your opponent calls your bluff, you’re done.

The second method is the complete opposite – patience. It revolves around making the opponent think that he has the upper hand. This requires more thinking and planning, but then, this is what the game is all about. For example, if the opponent is focusing on one row, and you have the corresponding Weather effect, wait until they buff their troops before you play it. Or, open with weak cards, and combo them with a stronger card. Be patient, take your time.

Focusing on Rows in Gwent

In Gwent, you can place cards in 3 different rows: Melee, Ranged and Siege. The ideal play is to focus on two rows. Focusing on more than one row gives you more opportunities to buff your units, giving your cards more value. Scattering your units this way will also protect you against Weather Cards. If you focus too much on one row, a single Weather card can bring you to your knees.

However, playing on all three rows isn’t smart either. This decreases your buff potential dramatically. It almost guarantees you’ll get hit by a Weather effect as well, because any of the three can harm you. Two rows is the sweet spot you want to hit.

Every deck has its combos. Play your faction of choice until you get to know it. Experiment and choose the combos that suit your play style. For example, you can build a Monsters Weather deck. This would center around the Frost and Fog effect, as Monsters have units that get buffed by these effects. That way, you have a Wild Hunt combo and a Foglet combo.

Don’t overdo it, however. More than two combos is pushing it. If you get combo-greedy, it will inflate your deck, and you don’t want that. Because of the limited and random card draw in Gwent, you can easily get stuck with no combo. Keep your deck thin and stick to two combos. This doesn’t necessarily apply to all decks and play styles, but it’s a good guideline.

Every faction has three leaders to choose from (one per faction at the start). Every Leader compliments the deck in some way, whether by adding raw power or tying in with card combos. Continuing our previous example, Dagon can be an excellent Leader for a Monsters Weather deck, because he summons any Weather effect you want. Experiment with different builds to find the one that suits your play style and the cards that are available to you. Be careful, though, as your choice of Leader can let the other player know what you’re up to.

So, these are our tips that should help you get the hang of the game pretty quickly. If you have some tricks of your own, share them in the comments. See you around the Gwent table!