The Lost Ark Rovlen location is the place where you can find the giant plant boss of West Luterra. As is the case with all world boss monsters, it spawns in only one place in the continent. Since it spawns in set, long intervals, you can easily miss it if you come through their home at an inopportune time. That’s why we’ve put together this guide, we’ll show you where to find the location of Rovlen in Lost Ark.

Where to Find Rovlen in Lost Ark?

Lost Ark Rovlen world boss is found in Bilbrin Forest zone of the West Luttera continent. If you open the map and take a gander at the west of the forest, you’ll see Grayhammer Mine. Now look slightly to the right and up. See that little nub there? That’s where the demonic plant boss is. It’s kinda hard to explain in words, so allow me to simply refer you to the map screenshot below. It’s honestly not that hard to find if you explore thoroughly, unlike, say, the Salt Giant or Rudric. After all, Rovlen is just a bloodthirsty, huge plant; it can’t actually move around.

Knowing the location of the Lost Ark Rovlen world boss in West Luterra is not enough though. As far as we know, the same rules that apply to all other world bosses are true for Audrey from Little Shop of Horrors here. You need to find it when its spawned. It spawns every thirty minutes, and you’ll have to keep an eye on the chat to see which channel it appeared in. Also, do not try to fight the plant on your own. The fact that it can’t charge you because it has no means of locomotion doesn’t mean it’s not extremely dangerous. Plus, it has over 1.5 million hit points. Even if Rovlen were completely docile, whittling down that amount of health single-handedly would be a nightmare.

Rovlen drops a lot of good loot when defeated. You’ll get its card and some epic loot. Lost Ark Rovlen also drops a special item called Rovlen’s Tentacle. You might be wondering what to do with? I have some bad news regarding that. You’ll have to eat it. To finish the West Luterra Adventurer’s Tome you have to collect Wriggling Tentacle Sashimi item. Adventurer’s tome says it is obtained from Rovlen. When you first kill the world boss you get its tentacle, but there’s a timer in the item’s description. This means that after 30 minutes it transforms. IT transformes into the Wriggling Tentacle Sashimi. Once you click on that in your inventory then you’ll complete the Adventurer’s Tome entry. MAke sure you eat it within 2 days or it will disappear from your inventory. 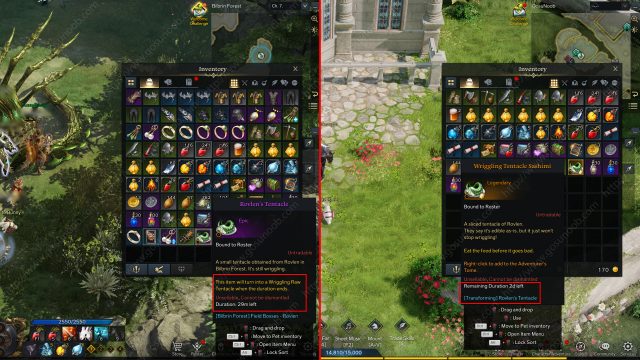 NEXT POSTCave Below the Grand Narukami Shrine Genshin Impact