A big elephant stands between me, seated on a couch with the DualSense in my hands and a TV on the other side of the room. It just exists there, casually making sure that I won’t be able to properly connect with Marvel’s Guardians of the Galaxy. Movies from the Marvel Cinematic Universe established rock-hard character canon – Chris Pratt IS Star-Lord, and Zoe Saldana IS Gamora. Now they expect me to enjoy a cinematic action game with the same heroes but played by random, B-rated cosplayers? That simply won’t do. I know that some people won’t be bothered, but the casting choice was a significant disappointment.

I had the same issue with Marvel’s Avengers. I’ll be damned if that wasn’t one of the top three reasons for its commercial failure, derivative gameplay, and everything else aside. It just felt weird from start to finish, like that one time in college when GF dragged me into an experimental theater to see a new-age adaptation of A Midsummer Night’s Dream. The playwright stabbed Shakespeare in the gut, twisting the knife for extra hurt. And by extension, me. 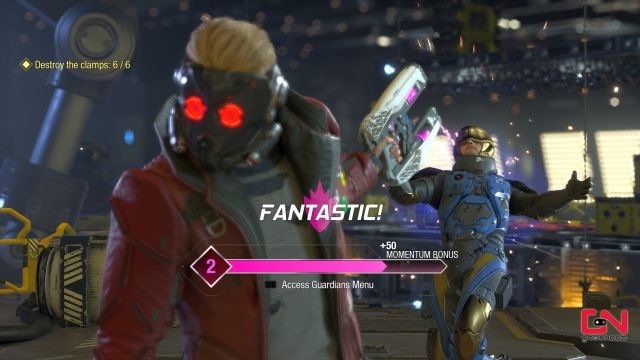 Marvel’s Guardians of the Galaxy offers a brand new story, never before explored in comics or movies. It is, of course, both silly and sinister and thus true to the source material. It begins with another moronic „get rich“ scheme concocted by Peter Quill, aka Star-Lord. The squad was to illegally trespass into the quarantine zone full of derelict starships from the Galactic War and try to catch one particular exotic animal to sell it to a wealthy collector.

Predictably, the gang of charming cretins gets far more than they bargained for, unleashing evil that will test their galaxy-saving powers to the very limits. Further elaborating on the story would expose everyone to the deadly dose of spoilers, so we’ll try to keep a lid on the reactor. Suffice to say that you are in for a LOT of surprises, with many nods to storylines and characters from comics never before seen on the big screen. 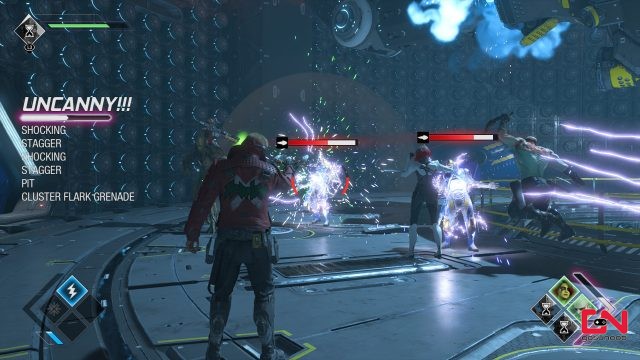 The game is a linear shooting adventure, with set-piece fights, unlockable attacks, lots of dialogue, much exposition, and some faux non-linear decisions along the way. You play as a Star-Lord, but you can direct other Guardians in combat, invoking special attacks and manually establishing their battle synergy. The system doesn’t work well for the first couple of chapters due to minimal options. But later on, when you unlock more abilities and face nastier foes in bigger groups, it clicks as it should.

They Never Shut Up 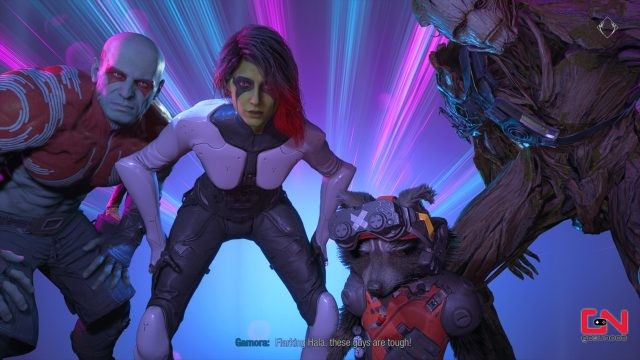 Guardians of Galaxy struggles to make a good first impression, offering constrained levels, basic combat, and a narrow, linear path. The game tries to compensate for all that by hurling deafening exposition in your face. The banter between characters never stops, not for a single second, existing almost as a layer of white noise on top of everything. It is so dominant that it drives the entire narrative without a pause for breath. They went over the top with Rocket. Yes, we get it; he likes explosions, pyrotechnic, and violence, but come on, give it a rest for 30 sec, please! Rocket from the other source material is far more stylish than this obnoxious caricature of itself. Everyone else also creates tension all the time, and only Star-Lord, the biggest idiot of them all, has a somewhat calming demeanor.

The aural violence stays with you until the finale, and only when ending credits start to roll, your anxiety will begin to dissipate. But not because of satisfying conclusion – relief will come with the cessation of babbling and yelling. Satisfying silence will be the reward for itself. I’m perfectly aware that there will be a lot of fans that will enjoy all that noise. 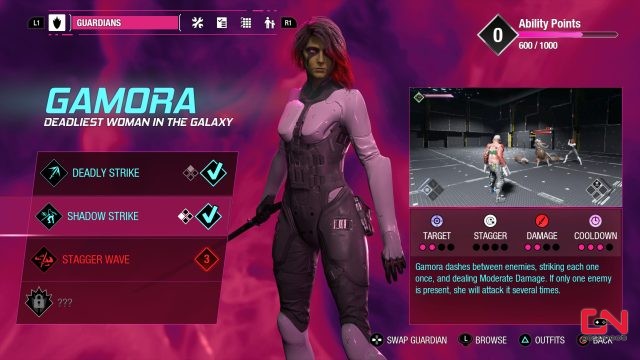 Marvel’s Guardians of the Galaxy offers limited character upgrades along with two main venues. Everyone gets four unlockable combat abilities – first, and the last are free, but two in-between are purchasable with leveling points. You’ll get a steady influx of those after each combat encounter, so you will easily unlock everything by the end. Star-Lord has additional augmentation options, unlocked with basic and advanced crafting materials. Those vary from faster shield recharge rate, extra health, active reload of his element guns, and so on. You’ll also get everything necessary by the second half of the adventure.

His dual guns will get another set of upgrades during the specific events in the campaign. Besides basic attacks, you’ll get the ability to shoot freezing, electrical, wind, and fiery bolts, exploiting the vulnerabilities of various foes and utilizing specific elements in solving light environmental puzzles. For example, you’d get to freeze geysers with freezing rays, pull the distant mobs with wind shots, and so on. Vulnerability to elements plays an important role in combatting the mini-bosses such as shielded shamans or priest droids. Those need to be staggered before you’ll be able to effectively damage them – using proper element and/or Guardian ability is the key for efficiently taking them down.

Never Gonna Give You Up 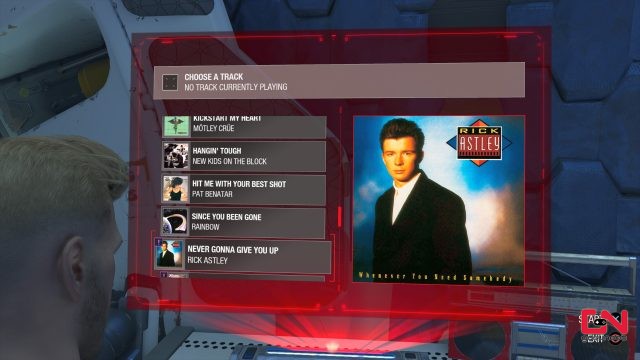 One undisputedly excellent segment of the game is the killer ‘80s soundtrack. There’s a lot of important stuff here, from Bonnie Tyler (Holding Out for a Hero), Mötley Crüe (Kickstart My Heart) to Frankie Goes To Hollywood (Relax), A-ha (Take On Me), and even New Kids on the Block (Hangin’ Tough). Those immortal tunes somewhat save this mediocre game from being overly irritable, at the same time enabling Gen Z players to explore the eighties music scene beyond the Rick Astley memes.

NEXT POSTHow to Get Rainbow Cubes Cookie Run Kingdom