Pendants are a new addition in Monster Hunter World: Iceborne. They’re cosmetic items that can be used to customize your weapons. There seem to be dozens of them, and every one can be attached to the handle of any weapon, dangling when you swing and jump around. There are numerous ways to unlock them, but the game doesn’t really explain them all that well. That’s why we’ve written this guide, to tell you all about MHW Iceborne pendants & how to customize weapons.

Keep in mind the pendants don’t actually “do” anything. They have no function in or outside of combat, except to allow you to customize the look of your weapon.

How to get pendants in MHW?

You can either craft pendants or receive them pre-made, but in both cases, you’ll need to do something to unlock them. This usually means completing a quest or reaching a milestone.

If they’re of the craftable sort, you’ll need to visit the Smithy, select Forge Equipment, then Pendants. They usually require one unique material that isn’t used in any other crafting recipes, and a handful of ores, monster parts and such. If you get the pendant itself as a reward, it’ll appear in your Item Box, under the Pendant Settings option.

We received this one when we increased the Boaboa unity level to 6. This is pretty much the exact same moment when you get the Tailrider Signal Palico gadget. 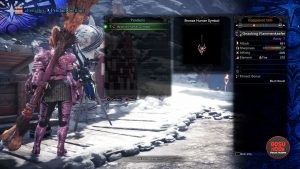 We know from the developer streams that there will be pendants that are awarded to hunters that take out the time to help newcomers. There’s also been some talk about Guided Lands pendants that require specific materials available only the in end game area, but we haven’t been able to confirm this yet, sadly.

NEXT POSTMHW Iceborne Monster Mantles – How to Get