If NBA 2K23 crashes every time you try to talk in Perco Latte (Perc-O-Latte) while trying to complete the “Going National” quest for the Business District, you should know that you are not the only person with this issue. The NBA 2K23 is now out, with fans of basketball around the world already exploring The City and going through their character journey in the MyCareer story mode. However, as is often the case with NBA 2K launches, the game is currently riddled with bugs. One such bug prevents players from completing the “Going National” Business District quest. That’s because NBA 2K23 freezes and crashes when they try to talk to Uncle Bobby in Perco Latte (Perc-O-Latte). Another bug says that “You Are Not Allowed to Play or Simulate Games Until the Following Quest Is Completed”. Read on to find possible fixes for these issues. 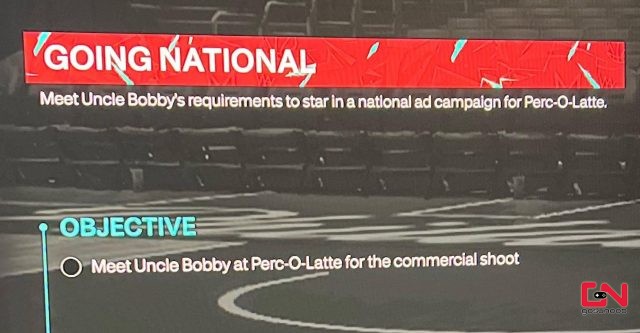 In NBA 2K23 MyCareer, once you complete the “Welcome to the League” quest, a set of four new main questlines will open. One of them, Not Your Father’s Hot Dogs, will kick off the Business District questline. And, for the most part, it will be rather straightforward. That is, until you get to the point where you need to go to Perco Latte (Perc-O-Latte) for the “Going National” quest.

The NBA 2K23 MyCareer “Going National” quest is one of the final tasks in this questline. You’ll need to visit Perc-O-Latte and meet Uncle Bobby there for a commercial shoot. Unfortunately, the quest appears to be bugged at the moment. Namely, a number of players report that NBA 2K23 simply crashes when they try to talk in Perco Latte. They press A (or X on PS) to talk and MyCareer freezes. So, is there a solution to bypass this bug? Regrettably, solutions for this are currently sparse.

Some players report that switching time zones has helped them fix the “Going National Perc-O-Latte” bug. Others report login in and out of your 2K account eventually helped them bypass this problem. However, these are not 100% proven and workable solutions. It seems that for many this glitch fixes itself at random. As things stand, for now, we will probably have to wait for the developers to fix the problem. Hopefully, that will be soon.

Another major issue which some players have with the Going National quest is that it doesn’t appear at all in the Quest list. Not only that, but it actually prevents players from progressing and playing MyCareer NBA games. For this, there are two solutions that we know. Firstly, be sure to talk to the girl inside the office building. She’s not exactly easy to spot, so make sure to look around the office thoroughly until you find her.

The second solution for this issue is to make sure to complete the Music and Fashion questlines. While we can not confirm that this is a requirement, some players report that they were only able to get the “Going National” quest to reappear after they have completed these two other major MyCareer storylines. For now, that’s all we know about this issue. We will search for other possible solutions and update our guide if new fixes for these bugs appear.

NEXT POSTWhere to Find Shrimp in Disney Dreamlight Valley, All Locations