Are Evil Dead The Game servers down? The newest game in the popular horror franchise brings co-op PvP and PvPvE action for numerous fans to enjoy. However, given that it is an online game, that comes with a risk of servers not always working properly. In this guide, you will find the latest information about Evil Dead The Game server status, current outage, and connection issues. 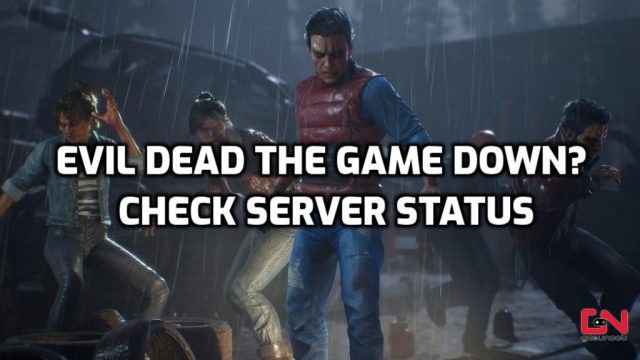 Are Evil Dead The Game Servers Down?

UPDATE: The game was released earlier than previously planned, at midnight local time. Unfortunately, this has been followed by a myriad of issues. Evil Dead The Game servers and online features are currently not working properly on the PS5 and Xbox consoles. At the time of writing, developers are working on fixing this issues.

ORIGINAL STORY: At the time of writing, Evil Dead The Game is yet to be released. The game launches on Friday, May 13th, 2022 at 4 pm CET / 3 pm BST / 10 am ET / 7 am PT. The servers will go online once the game launches. It’s worth noting that the game has full cross-play support.

However, the game’s servers can still go offline from time to time for many reasons. There could be server downtime due to scheduled maintenance. If there is some big update, it can require the game to go offline for several hours in order for developers to deploy the update. Sometimes a game-breaking bug may appear, at which point developers will bring the game down until it’s fixed. Finally, sometimes there can be issues affecting servers directly, which will also result in an outage. Whenever there’s downtime or an outage, we will update the article with the latest information.

How to check Evil Dead The Game Server Status

The best way to stay informed about the Evil Dead The Game server status is by checking the official Twitter page of the game. If there are scheduled updates or maintenance, developers will inform the player base there. In addition, the Saber Interactive Twitter is also a good place to find the latest news about the game. Finally, you can always come back here, as we will make sure to regularly update the article with all the information about the current outages, connections issues, and server problems in Evil Dead The Game.

NEXT POSTHas Legends of Tomorrow Been Cancelled, Is There Going To Be Season 8