Hob, a beautiful single player puzzle game featuring a wordless narrative, has its release date set for September 26, 2017. The pre-orders are open on Steam, GoG and the PlayStation Store. There is currently a discount on Hob lowering the usual price of $20. There are also many other surprises.

Hob is a single player puzzle game developed by Runic Games, the same team behind Torchlight and Torchlight 2. In Hob, you are sent on an adventure to save the world. In a wordless narrative, you’ll get to experience the story as you go through the planet on your own. Some of the strange lifeforms that inhabit the world will be a part of it. Like the Sprites, beautiful Princess Mononoke-inspired characters, who play a major role in the narrative, even though they are side characters. You’ll not only get to know the world with them, but they’ll also help and guide you. And how could you not fall in love with them when they are so cute?

The world will transform according to your actions, as you solve the puzzles and repair the planet. With the help of a mechanical glove-arm, you’ll be able to grapple, punch and warp. Use it wisely, as there are rogue creatures out there that are not fond of your actions. 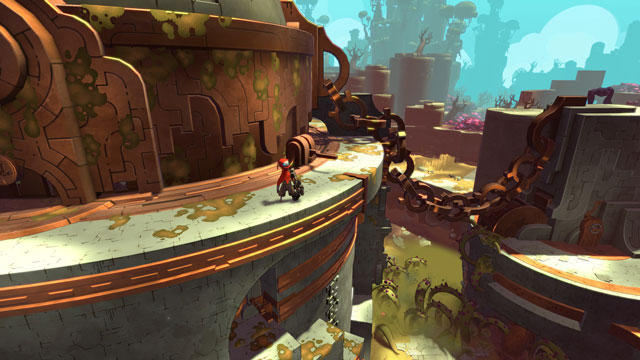 Once it gets released, Hob will go for $20. If you decide to pre-purchase it, you get a 10% discount, making it $18, and the HOB World Raise Theme for PlayStation 4. The promotion ends on release date. You’ll also find the game in the Runic Games Collection bundle. The games featured in there are Torchlight, Torchlight II and Hob. With a 50%+ discount, you can get all three games for around $25.

There is also an ongoing “Name an Achievement, Win a Prize!” contest that lets you do what is in the name of the event. This event lasts until Friday night, and the winners will be revealed early next week. Some of the prizes are the chance to name one of the trophies, get your name in the credits, or win a free digital copy of Hob. To check all the rules and everything there is to it, please visit the official game page.