Necromunda: Hired Gun is out and with it some nice pre-order bonus items from the Hunter’s Bounty Pack that you can equip once you are at a specific location. If you pre-ordered the game, you will have received four items as part of the Hunter’s Bounty Pack. These include a reskin for your trusty knife, stub gun, outfit, and mastiff chew toy. However, you won’t be able to equip these right at the start of the game. In this Necromunda Hired Gun Pre-Order Bonus Items Location – Equip Hunter’s Bounty Pack guide, we will show you how and when you can equip these items. 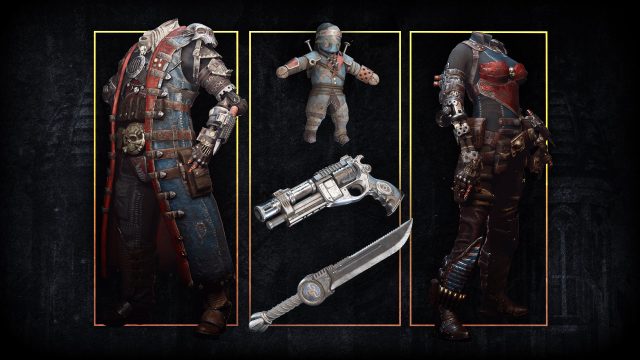 Where to Find Pre-Order Bonus Items in Necromunda: Hired Gun?

You will be able to equip these once you reach Martyr’s End. The customization feature which you use to change the appearance of your character will become available after you speak with the Bartender there. Interact with her and select the “Show me what you can do for me.” topic line. You will be taken to a selection screen where you can choose between different outfits. Select the “[DLC] Guilder” and you will change your appearance to this Guilder style.

In Necromunda slang, Guilder denotes a member of the affluent Merchant Guild. These four items now have a blue paintjob and hard metallic coating. The biggest change is made to the mastiff chew toy you use to summon your cyber-doggie. Instead of a rat chew toy, you will now squeeze a human-shaped doll. All of these are just cosmetic changes and they do not change anything concerning how these items work.

That’s it, you now know everything needed to know concerning Necromunda Hired Gun Pre-Order Bonus Items Location – Equip Hunter’s Bounty Pack. More outfit packs are expected to be released in the future. If you still haven’t had the chance to, we invite you to check out our Necromunda: Hired gun review.

NEXT POSTHow to Change Outfits in Necromunda Hired Gun