PlayerUnknown’s Battlegrounds has shown a new map in development, which is set in a desert area of Peru. This is just a first out of two new maps that are coming soon. If you look closely, you might even find something more to it…

Brendan Greene, the creator of PlayerUnknown’s Battlegrounds, talked about the map and other new features during E3 2017. What we know about this desert map so far is that it’s a one out of two new maps that are coming. The location is in Peru, and it features ruined cities and sandstorms. The storms are a part of the new weather feature that should make the game even more realistic.

The second map, that will probably come after the Peru desert one, will be placed in the Adriatic area. It will have a big Cosmodrome at the center of the map, and it will feature snow.

As soon as the pictures were posted, speculations about its content started. If we are to believe them without any doubt, we can expect to ride on the running trains on this map, which is highly unlikely, but still… There is also a bicycle on one of the pictures; maybe we’ll be able to drive them soon. 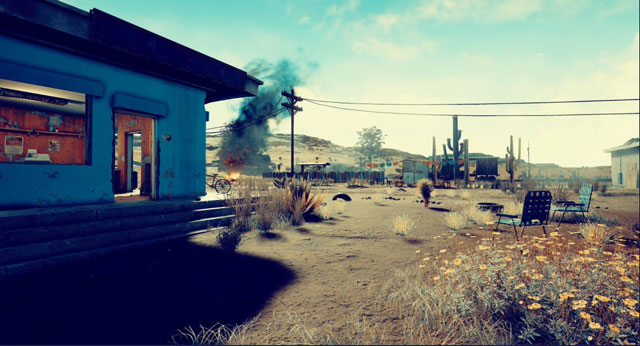 The cacti on the Peru desert map don’t look like a good spot to hide behind, but on the other hand, there are not many hiding places. Although it may seem like a huge open map with nothing in it, allegedly, it has a massive city at its center, with a stadium, a long river, temple, sand dunes, slums and more.

PlayerUnknown’s Battleground recently announced that it has sold over 4 million copies in a three-month period. The announcement came at the same time as the Early Access Week 13 update. It had a tremendous impact on the game servers. It made the game run smoother, with a higher FPS count.