Nier Replicant Disturbing the Sleep of Kings quest is one of the missions you can complete in the game, in fact, you have to do the quest to unlock the Labyrinth’s Song two-handed sword. This is necessary if you want to eventually unlock all the endings. However, there are a few stumbling blocks here. For one, how do you start the Disturbing the Sleep of Kings quest in the first place? It’s not like the game will tell you, to be honest. And once you do manage to begin the mission, figuring out how to complete it is a whole different matter. Well, we’ve put together this guide to help you out on your journey.

To start the Disturbing the Sleep of Kings quest in Nier Replicant, you first have to complete the quest called A Shade Entombed. In order to do that, you have to play through the game until you return to Facade as an adult, and then complete the quest line in the city until you get the Cerberus Key Fragment. Once you have all that, go and talk to the guard standing to the right of the entrance into Facade. Go back to the Barren Temple (you might need the Royal Compass to do so) and challenge and defeat the big Shade at the back of the temple. Lastly, investigate one of the people laying on the floor, then go back to Facade. Head into the King’s Mansion and talk to the king on the roof to start the quest.

How to Complete Disturbing The Sleep Of Kings Quest

To complete the Disturbing The Sleep of Kings quest in Nier Replicant, after you get the quest from the king, head back into the Barren Temple. You’ll have to complete all the trials. Fortunately, you won’t have to repeat the temple puzzles that you’ve already done on your journeys so far. At the very end of the temple, you’ll have to battle another shade through a huge bullet hell nightmare, as you can see below. 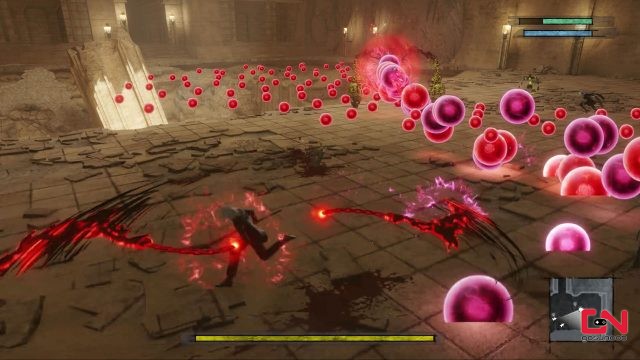 Once you defeat the boss and pick everything up, you’ll find yourself back on the roof of the mansion. Talk to the king, and you’ll get your reward – the Labyrinth’s Song two-handed sword. Reminder – you’ll need to collect all the weapons in the game to eventually unlock the new Ending E in Nier Replicant.