The Forest Veiled in Darkness is the first sub-mission in Nioh 2. There are only two Kodama spirits to be found on this map, but they’re relatively well hidden and you might have trouble finding them on your own. They’re essential if you want to activate all the blessings, though, so there’s no excuse. If you’re having trouble finding them, this guide will show you all Kodama locations in Forest Veiled in Darkness in Nioh 2.

Where to find Kodama in the Forest Veiled in Darkness?

For the first one, follow the path down the hill, past Tokichiro and under the bridge. Turn left and go up the slope. When you see an old tree covered in glowing yellow mushrooms, turn right and look for the Kodama on the ledge next to the tree. He’ll be hidden between some mushrooms, so look closely.

For the next one, you should continue down the road towards the long cliff with the house at the end. After you’ve cleared the enemies on the cliff, you might notice a black chest in front of the house. The Kodama is behind the chest. 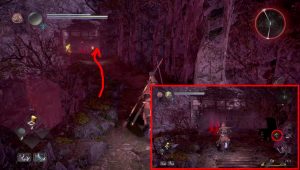 And that’s it! That’s all the Kodama collectibles in this level. It’s a short mission, and there’s not much to do on the map, but the green spirits add up. If you’ve already cleared the Kodama from the Village of Cursed Blossoms, you’ll have nine in total. There are two more proper missions after this, and another sub-mission. It all adds up to 25, which is how many Kodama you need to activate all five blessings and get all kinds of bonuses. They’re kinda temporary, though – as soon as you go into another region, you’ll have to start rounding up the spirits all over again if you want your blessings back.

NEXT POSTCore Score Trophy – How to Get in Nioh 2