Kodama are collectibles in Nioh 2. Collecting them increases the capacity of your healing flask, which means finding more means better chances of surviving in this cruel, harsh world. There are seven of them in the Village of Cursed Blossoms, which is the first mission in the game. They’re pretty well hidden, and chances are you’ll miss some if you don’t turn the whole place upside down. This guide will help you by showing you all Nioh 2 Kodama locations in Village of Cursed Blossoms.

The first Kodama in this mission appears after you encounter the enemy with the bull’s head at the start, the one dragging a giant club. Go up the hill, past the cherry tree, all the while hugging the right side of the road, and you’ll find it on the plateau next to a dead body under a tree.

From there, go to the hut where the first Yokai fog instance is. Go past it, then hug the left wall while you go round in circles, until you’re in a narrow corridor with a Kodama on your left.

The next one is in the village. Find the road that leads up the hill, then go behind the houses next to it. You’ll find the little green creature there, hiding behind sacks and hay bales.

Follow the path up the hill, then cross onto the rooftops. Follow the scaffolding until you reach the last house. Turn right, and drop down – there should be a well there. Go into the house on the right, and look left immediately as you enter. The Kodama will be behind the wicker baskets.

Leave the house and head past the bonfire and to the left. Break through the stack of crates and you’ll find the next collectible in the tall grass.

Pass through the rest of the village and go through the bamboo grove on the left. Go right, under the torii and up the stairs. The Kodama will be next to the stone lantern on the right, at the top of the stairs.

The last one comes after you open the big wooden gate using the Inner Shrine Key. As soon as you’re through the door, look to the left and you’ll find the Kodama on the ground. 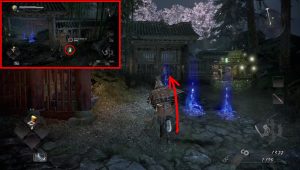 If you prefer moving pictures, we also have a video guide showing the whole route in one nifty go.

PREVIOUS POSTNioh 2 Co-op How to Play with Friends