Vy’keen Optional Conversations are a type of puzzle in No Man’s Sky. When you meet a Vy’keen alien, they’ll sometimes present you with a situation you can respond to in several ways. Usually, only one of the choices will yield great rewards. It’s often hard to foresee which option leads to a favorable outcome. In this guide, we’re going to show you Vy’keen optional quests in No Man’s Sky, which answers lead to the best rewards. 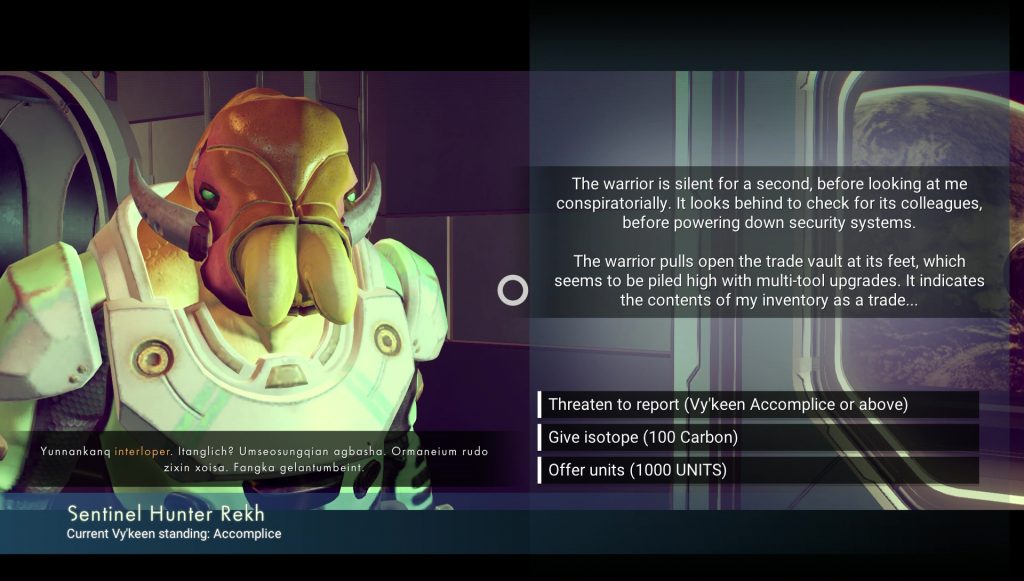 1. Description: The warrior is silent for a second, before looking at me conspiratorially. It looks behind to check for its colleagues, before powering down security systems.
The warrior pulls open the trade vault at its feet, which seems to be piled high with multi-tool upgrades. It indicates the contents of my inventory as a trade…
Answers:

2. Description: A red, jagged and recent bite mark is wrapped around the entirety of the warrior’s neck. Claw marks have been dragged through its chest, and its suit’s restoration and healing systems are blinking offline.
The lifeform barks contentedly at me, satisfied with its narrow victory. It’s clear, however, that its injuries are severe. It has trouble breathing.
Answers:

3. Description: The warrior’s facial markings draw into a smirk as it looks me up and down. I feel like I’m being sized up as a potential combatant. The creature points to an intriguing blueprint on its screen, then points to its own face. I’m being goaded into punching it.
Answers:

4. Description: The panicked lifeform is studying a diagram of two warriors in combat, while a chosen form of multi-tool weaponry sits below in a storage vault.
An angry recorded message is playing. It’s a sequence of furious barks and screams that clearly have a moral high ground. The lifeform sees the battle-scars on my exosuit, and instantly yelps a question.
Answers:

5. Description: The warrior’s nostrils flare in hope and expectation. A holographic image showing military plans appears around us.
On one side of the battlefield stands the creature’s own warrior race, and on the other the robotic Sentinels. The warrior demands that I point to one side or the other.
Answers:

6. Description: The warrior is young and looks terrified. Military orders for an upcoming operation fill it’s terminal screen. When it sees me it’s eyes widen, and it drops to the floor on its knees – proffers its multi-tool up towards me.
Its yelps sound pleading. The fear in its movements are more than apparent. It’s so on edge that it doesn’t seem aware of the security cameras that surround us, watching its every move.
Answers:

7. Description: The warrior seems furiuous with igself. It slams its multi-tool onto a nearby surface and pulls the trigger again and again, but nothing happens.
All weapons systems look functional, but their end result is nothing more than a hollow and empty click. The lifeform looks at you expectantly.
Answers:

7b. Description: The lifeform clicks its heels together in an authoritarian fashion, before plunging a syringe dripping with corrosive green liquid into my arm. Holographic images of two alien races appear in my visor – a small reptilian figure, and a taller lifeform in a metal casing.
The warrior snarls at me, and its fingers hover over the injector – which can surely cause damage to life, limb or equipment. It begins its interrogation…
Answers:

7c. Description: The warrior looks up from a screen of flashing alerts. It bares its teeth at me, and quivers with barely contained fury.
It’s clear that my presence is barely tolerated here. Its hand reaches to its weapon.
Answers:

8. Description: The warrior is browsing a map of the surrounding landscape. Certain areas contain markings that represent Sentinels, which the lifeform is highlighting with an excited snarl.
It strokers its boltcaster absentmindedly, before checking the ammo charge stored in the clip. On this, its eyes jolt up towards me. It barks a question, but it sounds more like a command.
Answers:

9. Description: The warrior barks abruptly and flourishes a knife. IT stares directly into my eyes as it draws the blade over the palm of its hand. Black bubbles of blood emerge through the slit in its glove.
It hands me the knife, clearly wanting me to reciprocate. It barks a little challenge, and pats the trade vault it’s sitting next to. This will probably hurt…
Answers:

10. Description: The warrior nods at me, before taking a small metal idol from the vault at its feet. As it clutches it, its eyes glaze over in a strange white sheen. I hear it mutter strange incantations that get louder, then louder again.
Without waiting to ask permission, it thrusts its hands into my inventory. They burn with a strange intensity – seeming to reach for the elements it presumes are within. The experience is terrifying.
Answers:

11. Description: The warrior is old, and of a high rank. It takes its time studying my body, and my equipment – and snarls with disapproval. It grabs my visor suddenly, and watches me instinctively flinch and recoil. It lets me go and rolls its eyes while I fall back in shock.
The lifeform’s disdain is polpable. I think of ways to turn this encounter around…
Answers:

12. Description: The warrior is building a nuclear warhead. The plans it holds in its hand are unmistakeable. A complicated sequence of technology blueprints and isotopic chemical reactions is waiting for the final addition of an element to be complete.
There are countless lives on an unknown planet, far out in the cosmos, tha twould one day end due to this lifeform’s work…
Answers:

13. Description: As I approach, the warrior appears alert and welcoming. Suddenly, however, a personal alarm sounds from its datapad. The lifeform instinctively falls into some kind of trance. Its eyes mist over, it stares straight through me and it mumbles the same strange mantra over and over again.
The trading vault at its feet appears unlocked, but there are security observation cameras dotted around the facility…
Answers:

14. Description: The warrior is tracking the paths of hundreds of warships across a galactic map, all converging on the same planetary system. This does not bode particularly well for the system in question… which appears to be populated by beaked traders of some variety.
A course plotted by the warrior itself has come up short. It cannot make the complete journey. It slams its fist against the terminal and howls until spittle flecks my visor.
Answers:

15. Description: The warrior’s nostrils flare as I approach. It inhales deeply and barks out what could be a warning. I hurriedly mime that I am peaceful, and know little of its kind or language.
It takes a second to think, then suddenly grabs my multi-tool while barking again into my visor – streaking it with saliva. It’s pointing at the indicator that shows which elements I carry. I do my best to keep calm.
Answers:

16. Description: The storage vault at the warrior’s feet shows clear signs of tampering. In fact, an explosive device has been attached to its hinges. The lifeform sees my shocked expression, and yelps in amusement.
The bomb needs fuel for ignition, which would most likely blow the vault wide open. The warrior impatiently tries to explain what should happen next…
Answers:

17. Description: The warrior seems pleased to see me. It barks twice, then retrieves two carved objects from behind its terminal. They are old, and it feels strange to see such ancient creations inside a technological hive like this…
The first is a chipped and bloody blade. The second is a battered shield.
Answers:

18. Description: The warrior looks at me with fire in its eyes. This species is clearly aggressive, and I doubt I’m welcome, yet the lifeform bows in greeting. Tradition and honor perhaps dictates it.
I don’t feel in imminent danger, and am about to turn and leave when the creature points towards my multi-tool. It barks with concern, and makes a motion to suggest that I should hand it over.
Answers:

19. Description: The downbeat lifeform is studying the image of another young warrior on its pad. The pictured warrior looks virile and impressive. It has facial tendrils that are outstretched. It appears rich, of good breeding stock. The look in its eyes is… sultry.
The lifeform looks to me with questioning eyes. It clearly needs someone to talk through this with.
Answers:

20. Description: The floor feels unsteady, and something clicks beneath my feet. The screen locks. Systems are aware I’m not the lifeform that usually operates here…
Answers:We’re going to update the guide with more conversations and outcomes as we progress through the game.

PREVIOUS POSTSignal Scanners – How To Use Them | No Man’s Sky