Pokemon Brilliant Diamond and Shining Pearl has many places that you will visit during the course of the game. One of the more unique locations is the Great Marsh. This place has its own unique rules and gameplay mechanics, but since it has many Pokemon that can be caught there – as well as some which are exclusive to that place – it’s definitely worth a visit. In this Great Marsh Brilliant Diamond & Shining Pearl guide, we will explain everything there is to know about the Great Marsh, including how to get there and which items and Pokemon you can find within. 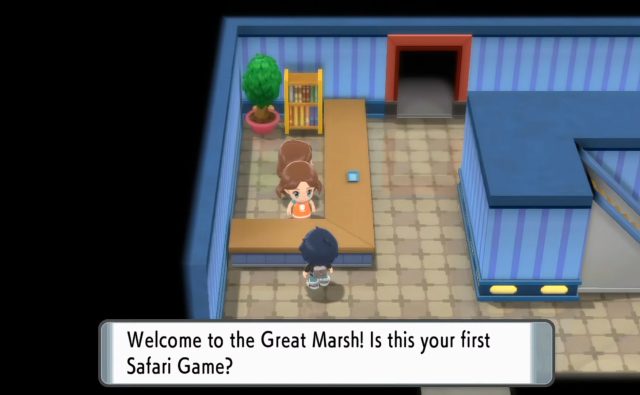 Once you get to Pastoria City, go to the large building at the north end of the city and enter there. You will need to pay 500 PokeDollars to gain entrance to the Great Marsh Safari Game. For this price, the Attendant will provide you with 30 Safari Balls and you will have a 500 step limit while you are in there. Inside, there are six separate areas. If you want to preserve your steps, you can also move around these using the train system within.

To catch the Pokemon within – such as Carnivine – you will use the Safari Balls, Mud, and Bait. The Safari Balls are pretty much the same thing like regular Poké Balls. When you throw the Mud at a Pokemon there, that Pokemon will be easier to catch, but more likely to flee. The Bait has the opposite effect – those Pokemon are now harder to catch but not nearly as likely to flee.

Another important thing to note is that you can also pay 100 PokeDollars to use the Binoculars on the second floor in the entrance building to see which Pokemon are available. This is the only way that some Pokemon, like the aforementioned Carnivine, will spawn there.

There are many items which you will be able to get in this area. These include Rare Candy, Honey, Hyper Potion, etc. But the most important thing available in the Great Marsh is the Defog Hidden Move, which you can unlock there.

What Pokemon Can You Catch in the Great Marsh?

Fishing also lets you catch various aquatic Pokemon. Using the Old Rod nets you Magikarp (100%). With the Good Rod, you can get Magikarp (65%), Barboach (35%), and Gyarados (5%). And the Super Rod provides Whiscash (60%), Carvanha (35%), and Gyarados (5%). If you use the Binoculars before getting the National Dex, you will get a 10% to see these Pokemon: Carnivine, Roselia, Drapion, Skorupi, Golduck, Staravia, Croagunk, and Toxicroak. And after you get the National Dex, these Pokemon will then appear, also with a 10% chance: Gulpin, Exeggcute, Kangaskhan, Paras, Shroomish, and Yanma.

NEXT POSTHow to Get Cresselia Pokemon Brilliant Diamond & Shining Pearl