In many ways, Pokemon Legends: Arceus is a big step forward in the evolution of Pokemon video games. It blends elements of Zelda: Breath of the Wild open-world gameplay with classic Pokemon mechanics. And, since it expands on the previous games’ formula, players are surprised when something about it has been changed or completely removed. Take, for example, the Trainer Card Picture and the way it functions in PLA. Players are unsure about whether or not they can change the picture now. This is strange, since changing the image was possible in older Pokemon games. Well, to answer whether or not this is still possible and how it works now, our Trainer Card Picture Change in Pokemon Legends Arceus guide is here to help. 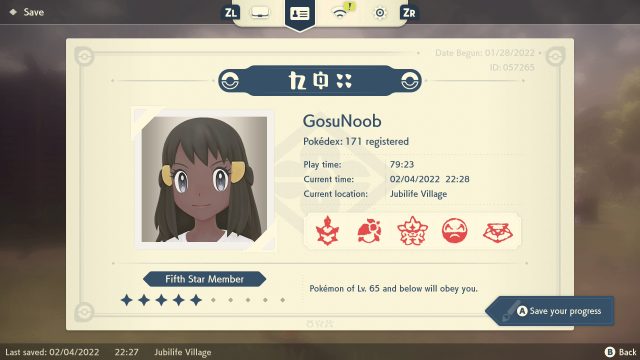 How to Change Trainer Card Picture in Pokemon Legends: Arceus?

In other Pokemon titles such as Pokemon UNITE, you have a lot of customization options when it comes to altering your Trainer Card. These options allow you to do things such as editing your Trainer Card pose, zoom, background, and so on. However, this isn’t the case in Pokemon Legends: Arceus. Unfortunately, you won’t be able to change the Trainer Card picture in any way. The face – and even hairstyle – that you selected during character creation will remain on the Card for the rest of the game.

Note that this doesn’t mean that you cannot change your appearance. In fact, you have many customization options, ranging from different clothing – including hats – and hairstyles. But, even when you do change your appearance, this will not be reflected in the Trainer Card Picture itself. That isn’t to say that the Trainer Card doesn’t have its uses. It will notify you of things such as how many Pokemon you have registered in your Pokedex, and which Nobles you have defeated. In any case, we hope that the game will be updated at some point in the future so that the Trainer Card Picture will change along with your in-game appearance. If that does happen, we will then update this guide.