Elden Ring is From software’s first foray into a truly open world. Every Soulsborne game was “open” to some extent, offering vast, interconnected zones with great potential for exploration, but this one goes one crucial step further. It may sound like over-simplification, but try to imagine Dark Souls crossed with Skyrim, and you’ll get a pretty good idea of what Elden Ring is all about.

Cryptic lore, environmental storytelling, melancholy, omnipresent decay. Some themes never change in From software games, and we wouldn’t want them to! It almost seems pointless discussing Elden Ring’s story, as it comfortably sails over the sea of beautiful déjà vu. It feels like Dark Souls 4, exploring the similar theme of chosen undead that wakes up in an unforgiving, decrepit world. Old rulers and heroes are corrupt now; their slaying and your ascension will begin the circle anew. Or something. You will farm runes instead of souls, blood echoes, or sen. The general rule is that many things in Elden Ring will feel quite familiar, no matter the difference in the name. 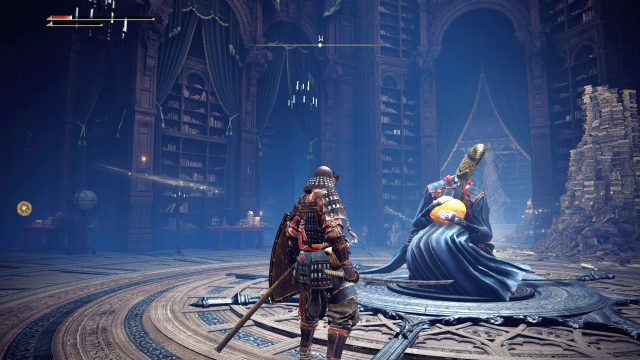 As before, the narrative is layered with subtle intricacies that are open to interpretation. If you lack time and/or imagination, you can always consult the professionals such as VaaatiVidya to deepen your horizons. But what about George R.R. Martin, you may ask, where is his contribution? I honestly have no idea, as the narrative feels consistent with From’s earlier works. There are dragons in the game, but we had those before. Tits and incest, however, are wholly absent. When recently asked about the game, Martin seemed surprised that it still didn’t come out, so his input was probably related to the initial world-building a few years back.

Compared to previous Soulsborne games, the major novelty is the very vast, very open environment. The Lands Between is enormous, full of surprises, things to kill, secluded spots to explore, and massive, story-related dungeons. Navigating through the environment on foot would be tiresome, so you get a convenient summonable horse named Torrent. He lacks any peer2peer functionality, but he can quickly transport you between places. You can also fight from horseback – some enemies are specifically designed to be engaged from the saddle. 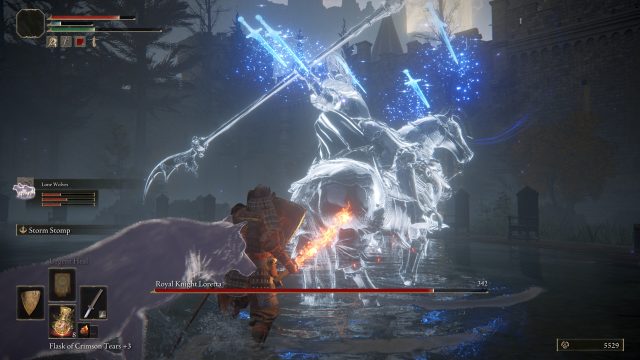 Speaking of bosses, there is a great number of optional bosses that can be ignored, bypassed, or fought if you feel like it. The open environment presents many opportunities for exploiting them, so the creative cheezers will have a great time here. Regarding major bosses, I must honestly say that I had seen most of their archetypes before. Of course, there are some exceptions, but if you are a Soulsborne veteran, don’t expect many OMG moments. I’ll remember Sif from original Dark Souls long after I forget all about Elden Ring’s twisted nomenklatura.

Poking behind a barrier 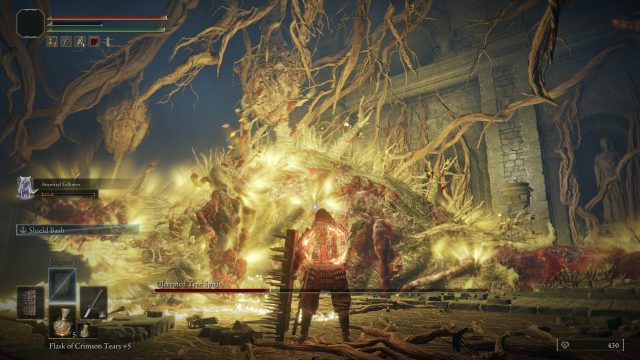 Most people will play Elden Ring conservatively, using a 1H weapon and a shield, perhaps with a bit of magic for extra punch or healing. It seems that Hidetaka Miyazaki, who once said that he doesn’t want shields in Bloodborne so the players will be forced to be more (pro)active, gave up on pushing the particular playstyle on the players. Some people, including me, like to turtle and poke with a sharp stick behind the barrier.

That’s not to say that combat is bereft of innovative elements, far from it. Ashes of War is a novel concept of augmenting weapons with special attacks and properties that affect combat in all sorts of ways. Those attacks use focus points (mana, practically), a blue resource that was under-utilized in melee builds in Dark Souls games. Spells are also using it, as well as spirit summoning, another helpful novelty. Spirits vary in power, combat utility, and focus cost, and you cannot use them everywhere. However, they are indispensable for boss fights, especially for anyone playing offline, unable to summon help. They cannot hold aggro, but they can steal it for a sec, buying you a short breather. Also, their attacks contribute to reducing the enemy poise, allowing you to stagger and crit them more often. 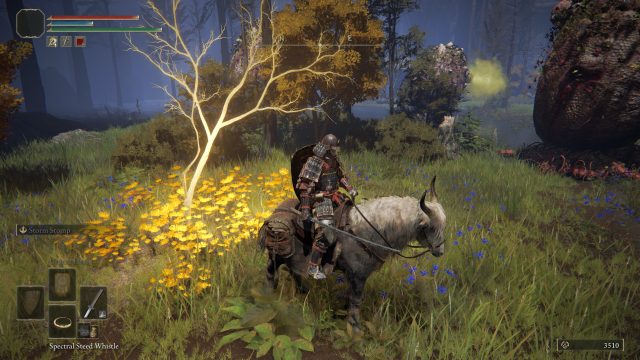 Another first for Soulsborne games is the broad utility of stealth. Special equipment and consumables augment it now, and sneaking, especially outside, in the tall grass, is very efficient. Stealth killing is helpful in the early game grind, as you can easily farm powerful mobs and level quickly.

Concept consistent with open-world is crafting, and Elden Ring is no exception to the custom. It will feel weird at first, farming herbs, animal body parts, ore, and other stuff to craft arrows, bolts, weapon greases, and other utilities. Yes, crafting is limited to consumables. It doesn’t translate to weapons and armor. You’ll obtain those in an old-fashioned way, as in any other Soulsborne game. 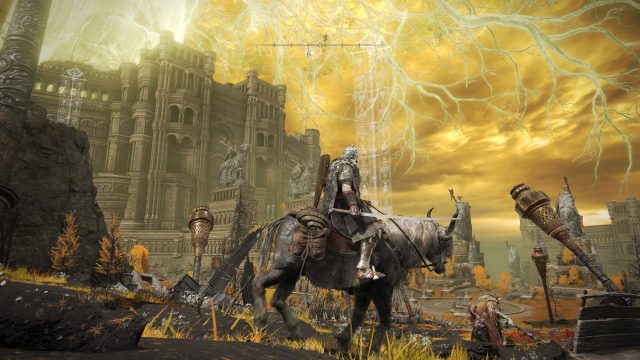 Elden Ring is a beautiful game, but there is an apparent dichotomy between swathes of generic open-world scenery and detailed, high-quality dungeons. Generic forests dotted with copy/paste ruins and big fragments of ancient stonework look like they were added in bulk using a filler algorithm. So, your primary motivation for exploring probably won’t be related to scenery, at least until you get on jaw-droppingly gorgeous Altus plateau.

Is Elden Ring THE Soulsborne, the one to rule them all? That is a highly personal question, and each one of us has our own answer. For me, that crown still stays firmly on Bloodborne’s head. Seven years ago, its liquid sinister horror mind-fuckery irrevocably altered my perception of true interactive terror. I used to dream about it. Elden Ring, I merely enjoy.