Uncharted Lost Legacy Your Prize trophy is obtained by getting to the top of the Hoysala Empire. It is required for achieving the platinum one. You can get this bronze trophy fairly early in the game, and it will reward you with amazing scenery.

How to get to the top of the Hoysala Empire?

To get to the top of the Hoysala Empire, you’ll need to wait until you reach chapter 4. This chapter takes place in The Western Ghats and you’ll reach it fairly early on.

As part of the story, you’ll need to climb the central tower on the map. This is a rather tall tower, and you’ll need to use your parkour skills to climb up the walls. If you’ve watched the gameplay trailers for Uncharted: The Lost Legacy, you might remember this tower, as it was shown off in the Western Ghats map showcase, a month or so ago.

After almost two minutes of jumping, you can enter the room with the stone doors on top of this tower. As part of the story, you’ll need to open those doors, which will let Chloe mark the ruins in the distance on her map. After you’ve opened all four doors, you’ll be able to interact with the lever in the middle of the room. Don’t do it.

Instead of using the level, you need to climb to the very top of the tower. Go outside and start ascending. Reach the top and just enjoy the view. In order for the trophy to register, you’ll need to remain here for a while. Do not move, even if Chloe tells you to. Just remain calm, and after almost a minute, the trophy will pop up and you’ll get a nice yoga pose scene. 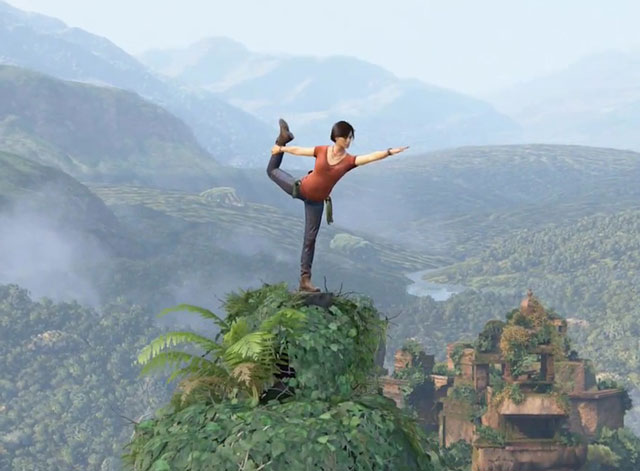 NEXT POSTFinal Fantasy XV released on PC in 2018 through Steam