Open Sesame! is the second main quest in the Hearts of Stone, the expansion for the Witcher 3: Wild Hunt.
▼Article Continues Below▼

Olgierd’s wishes were unusual, to say the least. One demand was for Geralt to bring him the house of Maximillian Borsodi. He didn’t supplement this request with such key details as where this house was located or just how the witcher was to transport said real estate. Geralt only knew his first stop should be Oxenfurt, the city to which the Borsodis had moved their world-famous auction house…

Go to the Borsodi auction house in Oxenfurt and ask for the owner.

Go to the northern square in Oxenfurt, to the Borsodi auction house, where overzealous guards will deny you access to the premises. Luckily, a dwarven banker, Vimme Vivaldi, will intercede on your behalf and help you enter the auction house. 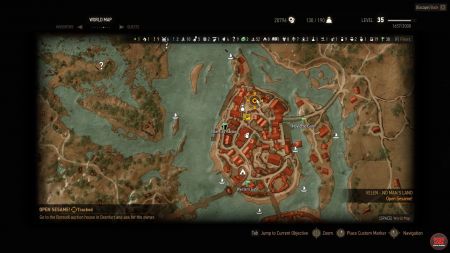 Click on the thumbnail to see the original image.
Location of the auction house 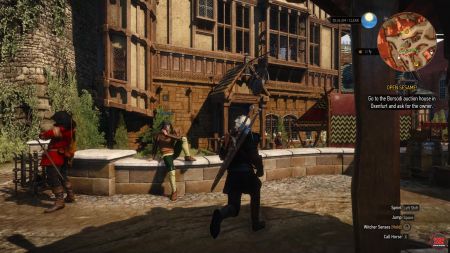 Click on the thumbnail to see the original image.
The Borsodi auction house

Go to the upper floor of the auction house

Vivaldi will escort you to the upper floor where there is a banquet underway. At this point you can choose to meet three of Vivaldi’s friends if you want, or you can sit down to participate in the auction.

If you decide to mingle, the three friends you’ll meet are:
Choice 1

A passionate Gwent player who’ll invite you to play a round with him. 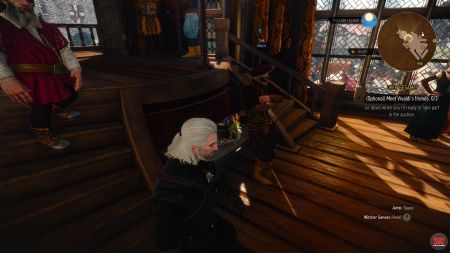 Click on the thumbnail to see the original image.
Hilbert
Choice 2

The countess collects all things related to witchers, and is willing to sell you some diagrams if you’ve got the coin.

NOTE: This is your only opportunity in the Hearts of Stone to purchase diagrams for the Viper School gear.You can buy the diagrams for:
You can also purchase the following manuscript pages:You can also help her locate a lost earring and learn more about her past involvement with a member of your order.0 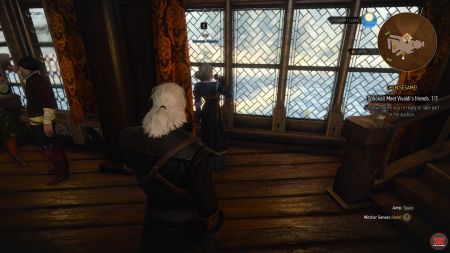 Click on the thumbnail to see the original image.
Countess Mignole
Choice 3

Yaromir is a purveyor of fine art and will, if you tell him that you too appreciate a good painting, tell you to point out the work of a certain Edward van der Knoob. The artwork you need to indicate is the portrait of a merchant.

Yaromir will be impressed by your artistic acuity and will advise you to bid on the painting by Van Rough, which you’ll then be able to sell at a much higher price to a collector in Novigrad. DO NOT tell Vimme about it – he will outbid you and rob you of the opportunity to make some nice profit. 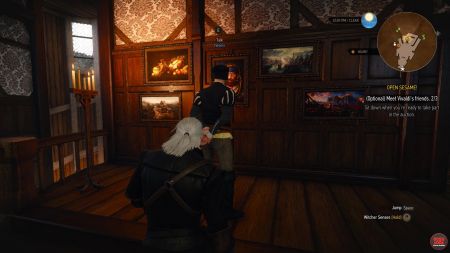 Click on the thumbnail to see the original image.
Yaromir

Wait for the auction to start.

Once the introductions have been dispensed with, the auction will begin. You’ll be able to bid on the items on display, after which there will be a brief intermission during which you will be introduced to Horst.

Upon learning why you’re there, Horst will have the guards escort you out of the auction house, with the explicit orders not to let you in again.

Outside, a Stranger will tell you that you need to get into the vault of the auction house, and that you need some yarrow extract from a herbalist who lives near Oxenfurt.

When you get to the herbalist’s hut, you’ll see several Fallen knights attempting to gain entry into the hut. Kill them and talk to the herbalist. Ask for the yarrow extract and he’ll lead you into the basement where the Stranger is waiting for you.

The Stranger has apparently been working on a plan to break into the vault for a year now, and wants you to join him. You’ll not be able to do it without help, however, so you’ll have to find someone to join your merry band. 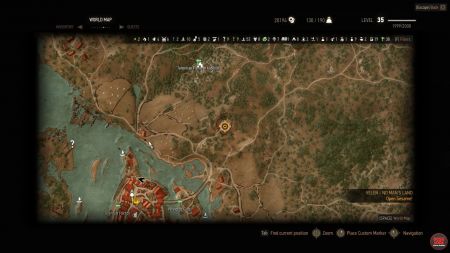 Click on the thumbnail to see the original image.
Location of the hut 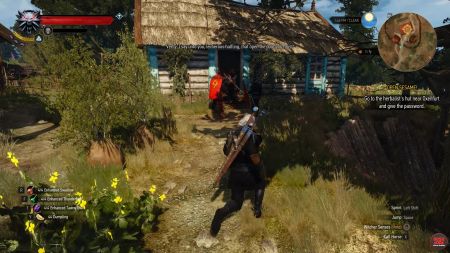 Click on the thumbnail to see the original image.
Kill the Fallen knights

There are two ways of opening the safe: picking its lock or blowing up its doors. If you wish to take the silent approach, you’ll need to find Quinto and convince him to join you. If you’re looking for a more explosive entrance, the dwarf Cassimir Bassi is your man.
Choice 1

If you decide to break into the vault with a bang, head to the village of Alness where you’ll see a distraught Cassimir sitting on top of his house, ready to blow himself to smithereens. The best way to stop him from committing suicide is to use Axii Delusion level 2 on him and force him to come down. Otherwise he will likely blow himself up and you’ll be forced to go with Quinto.

If you convince Cassimir to come down, he’ll go to the herbalist’s hut where the Stranger will tell him all about your mission. 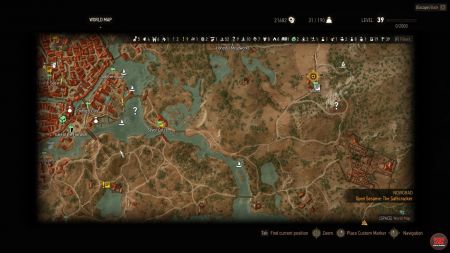 Click on the thumbnail to see the original image.
Cassimir is in the village of Alness
Choice 2

You’ll find Quinto in a mercenary camp not far from the herbalist’s hut, to the east. You’ll obviously have to get him out of there if you want him to help you, which you can do in one of three ways:
Choice 1

Pay to have him released

Paying off the bounty will set you back 200 Crowns, although you can bring the price down to 170 if you’re good at negotiating.

Once Quinto is free, send him to the herbalist’s hut.
Choice 2

Beat the commander at Gwent.

The commander likes to play cards. Beat him in a game to have Quinto released.

When you’ve freed Quinto, tell him to go to the herbalist’s hut.
Choice 3

Insult the commander to force him to fight you, then defeat him in combat to free Quinto.

Now that Quinto is out of the cage, send him to the herbalist’s hut.

When it comes to breaking into the auction house’s vault, the Stranger gave you two possible assistants to choose from: Hugo Huff and Eveline Gallo.

Unfortunately, if you go after Hugo, you’ll learn that he died at the hands of some criminals, so your only option is to recruit Eveline. Her troupe has set up camp northeast of Oxenfurt. Go there and look for Eveline at the back of the camp; she will be talking to another member of the troupe. Tell her what you’re planing to do and she’ll agree to help you. However, as it always happens, you’ll have to do her a favor first…

You’ll have to shout four apples off her friend’s head, hand, and foot with your crossbow. They’re easy to hit if you aim carefully, but you’ll pass the test even if you shoot the elf in the face. With the test successfully completed, tell Eveline to go to the herbalist’s hut where the other members of your crew are waiting.

Finally, you’ll need to make sure that the guards in Oxenfurt do not interfere with your little scheme. The Stranger proposed to spike the garrison’s stew with a special “spice” that would make them very unwilling to attend to their duties.

It must not kill anyone, however, but you’ll need to concoct something that will have an equally debilitating effect. What you need is a Cleansing Mixture, and it is made from Rotfiend Blood and other ingredients.

Once you have the ingredients, you’ll need a cook to spike the stew. Go back to the Borsodi auction house and use your Witcher Senses to listen in on what the guards at the front door are talking about. They won’t say anything of importance, so head to the back of the auction house, where you first met the Stranger, and to the same with the guards there. Once again, the conversation will prove to be uninformative.

Jump over the fence and onto the walkway located at the back of the auction house, then find another pair of guards by using your Witcher Senses. Follow them to learn where you can find the Cook.

He is on the dock under the Western Gate. You can convince him to spike the stew by either bribing him with 200 Crowns, or using Axii to make him do it free of charge.

The heist itself will proceed in a very similar fashion, regardless of your choice of companions.

At the ground floor, you’ll have to fight five guards. Killing three of them will start a cutscene in which Horst Borsodi appears, calls the city watch, then locks himself in the vault. The city watch will soon appear, at which point you’ll be able to use the remaining two guards as leverage. (You can also decide not to do that, it’s your choice)

How the remainder of the heist plays out will depend on your choice of safecracker.
Choice 1

If you preferred the silent approach, you’ll avoid fighting the guards outside. When they appear, choose the following dialogue options:Choose these options to avoid having the guards break into the auction house. Even thought there are three of them, you don’t need distraction right now. After that’s done, follow the Stranger into the basement and speak to Quinto, after which he’ll pick the lock and you’ll be able to go inside.

Before you go in, cast Quen on yourself and choose Aard or Igni as your active sign. You’ll need to do that because the floor behind the door is booby-trapped and there will be four Arachnomorphs to fight in addition.
Choice 2

Regardless of whether or not you manage to keep the guards out of the auction house, when Cassimir blows the vault’s door open all hell will break loose. The three guards will burst in and Eveline will flee. Kill the guards and proceed down into the vault. This time you won’t have to worry about giant spiders as the explosion won’t trigger the booby traps.

You’ll now confront Horst Borsodi, but before you do, the Stranger will reveal himself to be Horst’s brother Ewald. Horst will offer you and the safecracker the chance to betray Ewald and get away with all of this without consequences.

NOTE: Cassimir will remain loyal to Ewald while Quinto will be willing to betray him and side with Horst.
Choice 1

If you side with Horst, you’ll have to fight Ewald (and Cassimir, if he is with you). Once the grizzly business is done, talk to Horst and decide if you want to take just the house, or the documents in it as well. Either way you’ll complete the quest.

Now go back to Olgeird, who is staying at the Alchemy Inn in Oxenfurt, close to the Oxenfurt Harbor signpost.
Choice 2

If you side with Ewald, you’ll have a tougher fight on your hands. You’ll need to defeat Horst, his guards, and your former safecracker, Quinto (if he is with you).

Focus on Horst, and once his health drops to about 5%, you’ll proceed automatically.

Once you’ve killed Horst, speak with Ewald and take either the house, or the house with the documents within. Both choices will complete the quest.

Go back to Olgeird at the Alchemy Inn in Oxenfurt, near the Oxenfurt Harbor signpost.