If you pre-order The Witcher 3: Wild Hunt through GameStop, one of the bonuses you’ll receive is the map of the game world. Looking at it, it’s easy to tell Novigrad is the epicenter of the Northern Realms – no other settlement comes even close to it when it comes to size.
▼Article Continues Below▼
More often, you’ll see small towns and villages among the hilltops and mountain ranges. There are a lot of islands both big and small, and a decent amount of water to be traversed. 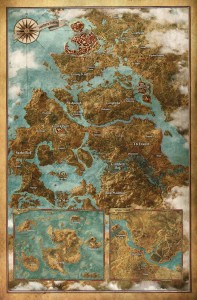 There are two areas that have a special place on the map – White Orchard and Shellige. We don’t know why they’re separated (or zoomed in) yet, and we’ll probably have to wait until the game is released to find out. The developers are claiming that a detailed playthrough of the game will require about 200 hours, and the map certainly backs those claims up.

The Witcher 3: Wild Hunt is set to release on PC, Xbox One and Playstation 4 on May 19th.

NEXT POSTThe first 15 minutes of The Witcher 3: Wild Hunt