Tilting the Balance is one of the story quests in Assassin’s Creed Valhalla. It’s part of the Ledecesterscire arc, and one of the final ones, to boot. In it, you’ll have to find king Burgred’s hideout so you can capture him and force him to support your candidate. However, the hideout isn’t marked on the map very well, and the description is somewhat vague, which is causing people some grief. Our AC Valhalla Tilting the Balance quest guide will show you king Burgred’s hideout location, so you can complete it.

Where to find king Burgred’s hideout?

The description says that king Burgred is hiding in an old crypt in the south of Ledecestrescire, where the Arwy and Alne rivers join. The place is called Offchurch, and it’s in the southwestern corner of the region.

Once you get there, you’ll have to either kill or get around a bunch of guards – definitely not a normal crypt. The entrance to the hideout is through the crypt – the biggest building in the lot. 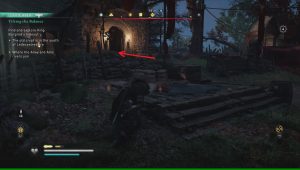 Once you go in, simply follow the corridors. They will lead you through several chambers with varying types of enemies, all of which you can dispatch safely and quietly if you prefer it that way. Of course, nothing’s stopping you from making a racket. In the end, you’ll reach king Burgred’s chamber, and you’ll have to fight him.

It’s not a difficult fight by any means, and when he admits defeat, you’ll tie him up and bring him back to base. You’ll have some trouble along the way – brigands attacking you, chasing you on horseback and such – but it’s nothing of note. Get your horse, put the man on it and ride away. Just keep to the roads and you’ll outrun your pursuers in no time.