Gunrunner is a most wanted side mission in Batman Arkham Knight. The first part of this mission is a part of the main story as well. This also represents the point from which you can start working on its completion. There are two additional franchise characters you’ll meet during this side mission. The entire goal is to find hidden weapon caches and destroy them. Although it can be a bit frustrating, the game rewards us with additional lore and upgrade points. 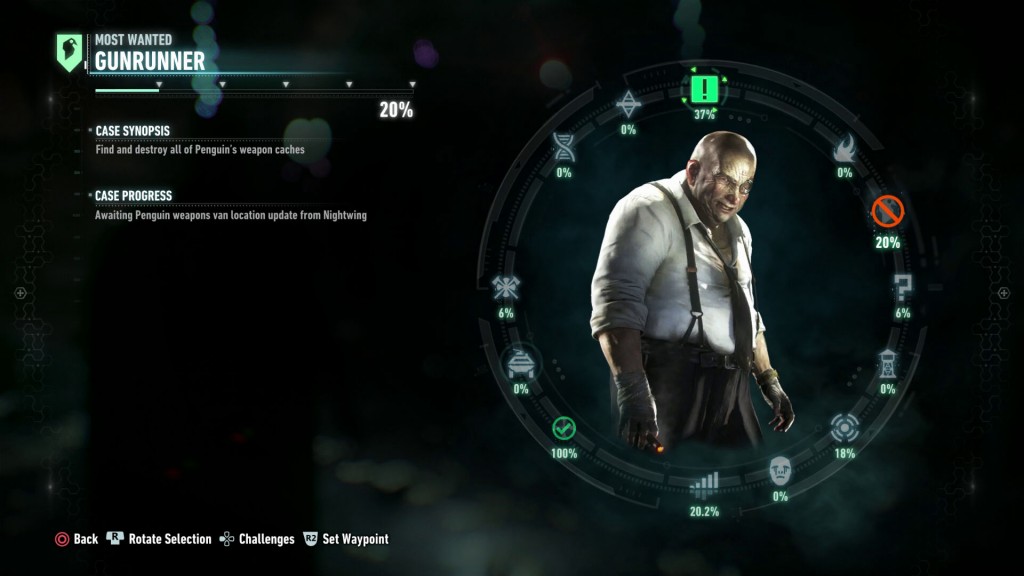 This is the crucial part of the game. This is where you use your Disruptor on the weapons van and follow it to the secret hideout. You can fail this part by losing the van from your sight. This fail “only” wastes your time. Luckily, Nightwing gives you an additional weapon van location that you can check out shortly after.
Since you want to save time and not lose the van, you might want to follow some guidelines:

Penguin’s secret hideout can be found in northern Miagani Island, across the large parking lot. Since you have to clear the rooftop of thugs and sentry guns in order to enter the hideout, use the strategic position of the parking lot to bring up the batmobile and blast the enemy forces. Use the small elevator shaft entrance on the roof to go down into the building. From there, a small vent will take you downstairs, close to Penguin. Interrogate him, defeat the thugs, plant the bomb on the weapon cache inside the vault, close the vault door and detonate the bomb.

Get to the entrance to Sionis Industries at ground floor, next to the two vending machines, close to the main road. Once you enter the first room, raise the gate and destroy two sentry guns with the Batmobile. Further more, one switch will reveal the glass rooftop. This is your entrance point. Go down and defeat 20 thugs and one brute. Destroy the weapon cache.

The entrance to the third weapons cache can be found in the tunnels in northwestern Founders’ Island. There is a store sign – “The Grinning Fishmonger” – next to the second floor doors. Clear the area of thugs and go through this door. Plant bombs on the concrete wall and take down the first group of thugs. Use the vent to get to the second room where the main group of thugs is. Repeat the actions from previous weapon caches.

The Fourth Weapon Cache is located inside Gotham Water Company in Chinatown, eastern Bleake Island. Access the underground tunnels in this area and head to the location marked on the map. Use the Batmobile to defeat the first group of thugs. Go inside this area and lower the bollards using the switch in the second floor office. This will allow you to use the Batmobile and its power winch to reveal the hidden entrance. Head to the weapon cache. From the area above, you can perform a Fear Multi-Takedown to ease your pain with combat.

Save Nightwing from Penguin

Penguin’s main hideout is located in southeastern Founders’ Island. You can enter it from the rooftops. Find a small vent, disable the sentry gun and enter another vent. This will take you to the main room. Go behind Nightwing and the large Penguin picture. You can rescue Nightwing and get into the last Gunrunner fight from here. Thirteen thugs and 2 brutes are no match for you and Nightwing. Be sure to be patient with Penguin, wait for the appropriate moment for a dual team takedown.

Take Penguin to the GCPD Lockup

As you take Penguin to the GCPD, you’ll also reunite him with his thugs. What a lovely moment. This is where the mission ends and you receive the end mission credits.

NEXT POSTOwn The Roads Side Mission | Batman: Arkham Knight