Dead ghosts are collectibles in Destiny 2. Nine of them were added in Shadowkeep, hidden across the Moon. Thing got complicated further with the addition of Lost Ghost Traces, consumables that allow you to buy ghost quests from Eris Morn. You’ll have to buy these quests, because the ghosts only appear after you do. If you’re wondering how the whole thing works and where to find the specific ghost fragments, keep reading our Destiny 2 Shadowkeep dead ghost locations guide.

How to get Lost Ghost Trace?

Lost ghost traces are consumables which drop randomly from activities on the Moon. They only start dropping once you’ve beaten the main story. If you want more, just keep existing on the Moon – open chests, kill high value targets, do public events and such. 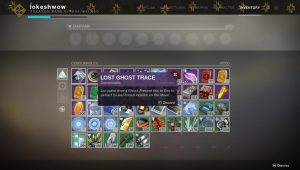 This one’s in the Anchor of Light. You’ll find it in the big round building in the middle of the area. You can either enter from the back, or through the opening on the second floor, then make your way to the small room next to the big round chamber. The ghost will be on the floor, in the corner to the right.

This one’s in Archer’s Line, the area in the west. You’ll find it in the western part of the map, next to a crate on a ledge on the side of the spooky green ravine. Watch your step.

The Dead Ghost in World’s Grave requires you to go deep into the bowels of the Moon. The best way to get there is through the Temple of Crota, as the name of the ghost kinda implies. Once you get there, you’ll have to find the correct side room. Check out our First Crota Team’s Fallen Dead Ghost Location in World’s Grave guide for a detailed explanation.

The Greatest Sacrifice Dead Ghost will be waiting for you in The Gatehouse area. you can get there by following the tunnel that you can enter in the north of Hellmouth. When you reach The Gatehouse, in the large circular room, look to where the natural light is pouring through to find the ghost. Or, head over to our Greatest Sacrifice Dead Ghost Location – Gatehouse guide, if you need further help.

Together Forever – Circle of Bones

To find the Together Forever Dead Ghost, you’ll again have to explore the depths of the Moon. Follow the same road that led you to the Greatest Sacrifice dead ghost, but go through the room and onward. When you reach the Circle of Bones, go into the central room and find the ghost next to one of the tanks. You can find a detailed guide in our Together Forever Dead Ghost Circle of Bones Location article.

As you can read in our True Believer Dead Ghost Location – Summoning Pits guide, you can get to the Summoning Pits through the Circle of Bones, as explained above. Just follow the terrace to the left, open the metal door, and there you are. Hop onto the ledge to the right, and there’s the ghost, among some rubble.

We’re going to keep playing the game, and we’ll update the guide with new locations as we discover them, impeded only by the slow drop rate of Lost Ghost Traces. If you’ve found any of the dead ghost fragments that we’re missing here, feel free to leave a comment and let us know.