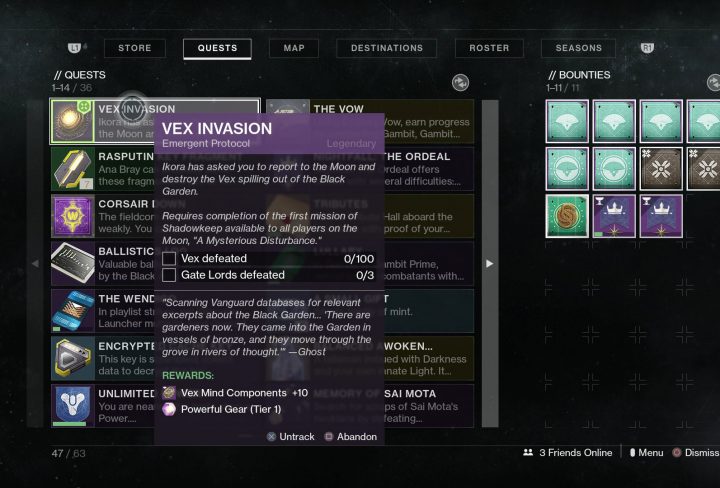 How to start Vex Offensive

You might be wondering how to start Vex Offensive, the new matchmade activity that went live along with the Garden of Salvation raid. It’s a bit poorly explained, but here’s what you need to do:

How to Start Eyes on the Moon Mission – Destiny 2 Shadowkeep?

To start the Eyes on The Moon mission in Destiny 2 Shadowkeep, you first have to go to Ikora Rey in the tower and collect the Vex Invasion bounty quest. Mind you, before you even attempt anything, you have to have the “A Mysterious Disturbance” quest under your belt. This mission is the first mission on the Moon, and it’s open for everybody to play.

Now, the next step is to head over to the moon, and go to one of the three Vex Invasion locations. Wait a bit, and you’ll soon see a fairly terrifying sight. Hordes of Vex are gonna start spilling out of the sky. Your job is gonna be to slaughter a hundred Vex and three Gate Lords, which have yellow health bars. This shouldn’t take too much time, since they’re just gonna be falling everywhere. Hallelujah, it’s raining Vex! If you don’t manage to do it in the first place, just wait for the event to start again. Alternatively, you can try to go back into orbit and then land again, it might help respawn the event

Just keep in mind that you can easily get swarmed, plus, there will several relatively high-powered enemies. Do not take the situation lightly, or they will wipe the floor with you. Once you’ve completed the task, aka killed 100 Vex and 3 Gate Lords, head to Eris Morn and hand the quest in. Now, you can begin the Vex Invasion proper. Good luck.

NEXT POSTVex Gate Lord – Where and How to Kill him in Destiny 2 Shadowkeep Vex Invasion Zone?