With the Taken King a new mechanic was introduced to Banshee-44, aka the Gunsmith. This Tower vendor now has reputation levels you can earn and also provides test weapons with attached tasks. Completing these tasks will earn you reputation with the Gunsmith. Based on your reputation you will be able to purchase special reward packages. These packages will convert to rewards every Wednesday during the event called Armsday. Mechanic is pretty straight forward and each week you will get new weapons to field test and earn new levels of reputation with the gunsmith.

You can also get random field test weapon drops from Vanguard Heroic Strikes and Taken Champions (go to Earth, Moon or Venus and find the new Taken events usually happening where random events happened before the Taken King). These all start quests to get x amount of kills with a telemetry effect on. It is also known that getting reputation Rank 3 as a warlock you can acquire TLALOC Exotic Scout Rifle. There are also Exotics for other classes; Fabian Strategy is an auto rifle for Titan and Ace of Spades is a hand cannon for Hunter.

Check out our list of all Destiny: The Taken King Guides & Secrets »
Beside the general Gunsmith reputation mechanic, I also wanted to cover some of the tasks associated with these field test weapons in this guide. Most of them are pretty easy to do. Some, though, require you to go out of your way to do them or know the best farming spots. 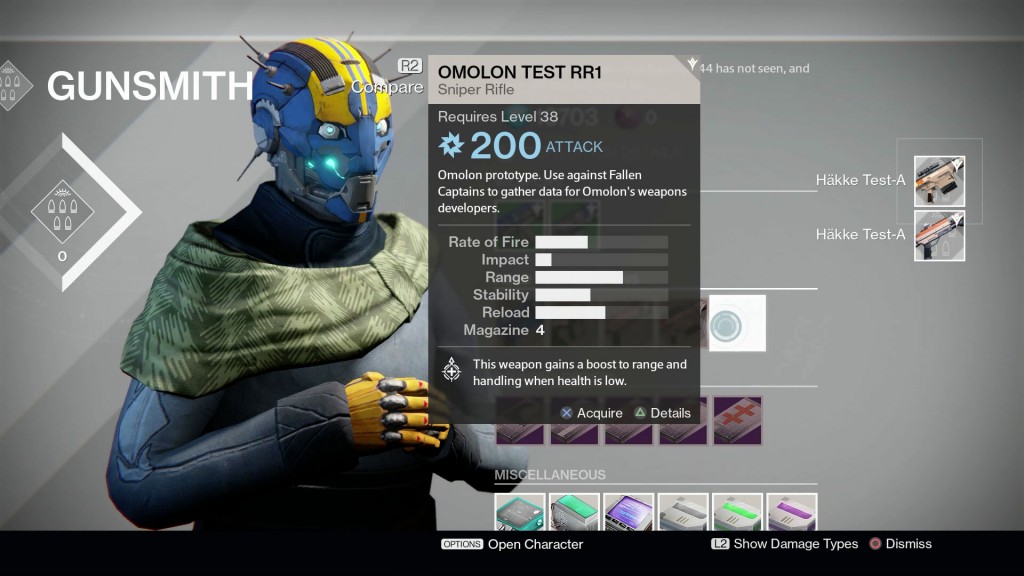 How to level up Gunsmith reputation

Here’s a quick recap of how to level up reputation with the Gunsmith and get a reward for Armsday.

How to get Exotic weapons from the Gunsmith

As I mentioned at the beginning of this article there is a quest you get from the Gunsmith that leads to an Exotic weapon for each of the classes. You first have to be Rank 3 with the Gunsmith (methods described above). Try and use your class items to boost the speed of Weapon testing or you can use telemetries for that weapon type. Next step is to get 100 kills with the weapon while having a Telemetry active (this is the case for warlock at least). Warlock step has you get 10 weapon parts from dismantling legendary or exotic weapons. You can dismantle some old Year one weapons for this (two should be enough). At the end you should get the exotic. We’ll update the guide with more info for other classes as well.

In week 2, Omolon test RR1 sniper rifle had a field test requiring you to kill Fallen Captains. There are various ways you can do this, but thanks to arkangelofkaos on Youtube there’s a fast and painless way to do this. Go to the Mothyard region of Earth (left region from where you spawn). In the back of the region is a plane whose wing goes up to a cave in the hill above. Inside this cave there are usually a Drege and Fallen Captain spawning. Once you kill the captain, go outside and jump real high. that should cheese reset the cave and get you another Captain. In case he doesn’t spawn kill whatever spawned and repeat. Video bellow shows the process.

This sounds pretty straight forward with a fusion rifle, but this week I got Hakke Test-A sniper rifle with this task. Luckily, the principle still holds. Kill two enemies in quick succession and you will start upgrading your field test weapon. Best way to do this is go to the mission on Earth The Dark Within (there will be multiple waves of Thrall once you enter the building) or do The Dark Beyond on the moon (waves of thrall coming at you when the gate opens).

We’ll add more tasks that need help as we discover them. If you have problems with any tasks please let us know in the comments below.

NEXT POSTHow To Use Three of Coins and farm Exotic Engrams