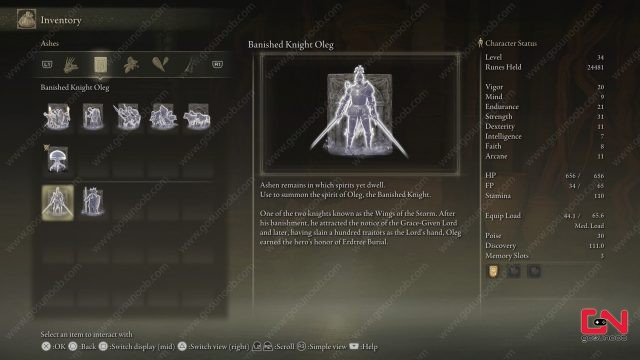 The Banished Knight Oleg Summon Ashen Remains are located in the Stranded Graveyard, or to be more precise, at the Fringe Folk Heroes Grave dungeon. You’ll find the Stranded Graveyard in the early game, as it is located in the starting region of Limgrave. The entrance to the grave is just southeast of the Church of Elleh, at the very edge of a cliff there. Check out the map below where we’ve pinpointed the location.

When you enter the Stranded Graveyard. You’ll need to deal with the first imp statue in Stranded Graveyard. It will require completing a small puzzle here, in order to remove the white fog barrier. Consult our guide for instructions. Upon completion, it will unlock access to the Fringefolk Hero’s Grave dungeon. Now, we did mention that this is near the starting region and rather easy to find in the early game, but we need to warn you. We absolutely do not recommend you to go into this dungeon until you are at least level 30, as this is not an early game dungeon, despite its location.

If you are confident enough to descent into the Fringefolk Hero’s Grave dungeon and search for the Banished Knight Oleg Summon location, then read on. Upon entering, you’ll first need to cross through a puddle full of poisonous muck. Be fast, as it rapidly applies damage which will kill you if you are too slow. But that’s just the beginning, as now the real torment begins. You’ll need to go all the way down to the main room and battle with the Ulcerated Tree Spirit boss, which will drop the Banished Knight Oleg Ashen Remains. The boss will not pose a big issue, but the same can not be said for the corridor which leads to the bottom.

The corridor is patrolled by a massive mechanical war chariot which will grind you into minced meat. The chariot goes up and down really fast, covering the entire width of the corridor. To avoid it, use alcoves on the sides of the corridor, but be careful as crossbowmen and swordsmen will attack you as well. You will almost certainly die a few times but eventually, you’ll get to the bottom. In the room there, you’ll face Ulcerated Tree Spirit. This monstrosity has a fire-spitting attack and can smash you with its body. From time to time it will dive towards you in an attempt to grab you with its jaw ad toss you around. It sounds hard, but it’s actually a relatively easy boss battle. Once you beat Ulcerated Tree Sprit, it will drop 18000 runes, a Golden Seed, and the Banished Knight Oleg Summon.

NEXT POSTElden Ring Godrick Great Rune, How to Get & Activate