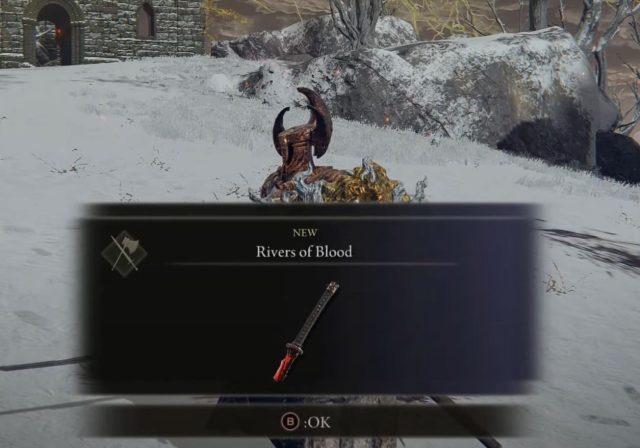 Where to Find Rivers of Blood in Elden Ring

Like many other late-game legendary armaments, the Rivers of Blood katana can be found in the Mountaintops of the Giants region. To be more precise, in the eastern parts of the region. The weapon is dropped by Bloody Finger Okina, an invading NPC phantom that spawns near the Church of Repose. And that’s exactly where you need to go. You can reach the Church of Repose by heading directly east from the Grand Lift of Rold. It can be a bit tricky to get there due to rough terrain, but you’ll eventually reach it. Check out the images below for the location and appearance.

When you finally find the Church, Bloody Finger Okina will invade you right in front of the Church’s entrance. He will not be a particularly tough opponent to beat. Once you defeat him, he’ll drop the Okina Mask, and the weapon we’ve come for – the Rivers of Blood katana! IMPORTANT NOTE: If you’ve already killed the Fire Giant, then Bloody Finger Okina will not spawn! If that’s the case, the only way to get the Rivers of Blood is if somebody gives it to you.

This Katana is a Str E, Dex D, and Arc D scaling weapon, and in order to wield it, it requires a minimum of Str 12, Dex 18, and Arc 20. It comes with a unique skill called Corpse Piler, which “forms a blade of cursed blood”. This ability allows players to perform several powerful successive attacks which will deal devastating damage. And that’s about all you need to know. Shoutout to Hatsuka Raigeki for the screenshots!