If Elden Ring is your first time playing a Soulsborne game, you are probably wondering what’s the best class for beginners in Elden Ring. Let’s be clear here, no matter which class you choose, Elden Ring will be an excruciatingly challenging experience. There’s no way around it. That’s the simple nature of the game. Nonetheless, some starting Elden Ring classes are undoubtedly more beginner-friendly. In this guide, we’ll explain which Elden Ring starting class to choose if you are playing Elden Ring for the first time. 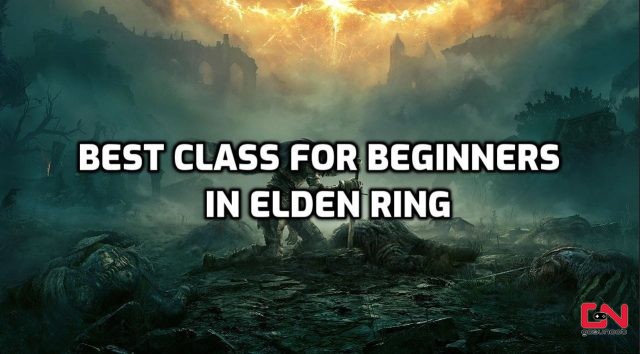 Which class is the easiest to play in Elden Ring?

What is The Best Class for Beginners in Elden Ring?

If you are an Elden Ring beginner disheartened by all the talking about the ridiculous difficulty of the game, the best Elden Ring class for beginners to choose is Vagabond. A complete novice in Souls-like games will find this class to be the most manageable one, and the least demanding in terms of pure mechanical skills. And although Elden Ring has Warriors as a starting class, the Vagabond is actually your typical “warrior” in other standard RPGs.

Let’s check out the Vagabond’s starting stats and items before we continue. When we break down Vagabond’s stats, you’ll better understand why is the Vagabond the best and easiest class for beginners in Elden Ring.

The Vagabond brings an excellent mix of starting stats, which makes him the best beginner class in Elden Ring. The Vagabond boasts a very high starting Vigor (15), an attribute that increases your total Health ( Hit Points – HP). The Vigor attribute also improves your fire, poison, and blight immunity. All this makes him a perfect “tank” class, which can withstand a lot of damage. While you can still be almost instantly killed by some particularly strong foes, you don’t need to worry about avoiding every single hit. This will give you a much-needed breathing room in combat, as sustainability is crucial in prolonged battles when resources are scarce and you struggle to survive until you reach the next Site of Grace.

Another stat that makes the Vagabond the most forgiving class (and therefore the best class for beginners) is the Strength attribute. With 14 points in Strength, the Vagabond excels in all kinds of physical damage builds. You will be able to wield even the heaviest weapons and armours in the game. You will be a walking fortress with almost impenetrable armours and heavy two-handed weapons to crush your enemies. Add to that high Dexterity, and it’s easy to understand why is the Vagabond the best class for beginners in Elden Ring.